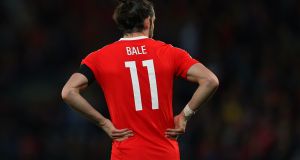 Bale has been sidelined since late November after undergoing surgery to repair the ankle tendon damage he suffered during a Champions League match against Sporting Lisbon.

Speaking on Friday, Zidane did not give an exact date as to when Bale might return, but is keeping his fingers crossed the 27-year-old will be available in time for the second leg of their Champions League last-16 tie with Napoli on March 7th.

The Frenchman told a press conference ahead of Madrid’s trip to Osasuna: “I hope that Bale is back with us before the return leg against Napoli. He still has to return to team training, which is the most important thing.

Madrid, who are one point clear at the top of LaLiga and have two games in hand on all their title rivals, are scheduled to play at least seven matches before their trip to Naples, including the first leg at home to Napoli next Wednesday and league trips to Valencia and Villarreal.

Wales’ next scheduled match is the World Cup qualifier against the Republic of Ireland on March 24th.