For all the joyous, spellbinding football this new documentary is a gut-wrenching one

The official trailer for 'Best (George Best: All By Himself)', a look at the life of legendary Manchester United and Northern Ireland footballer George Best. Video: Dog Woof 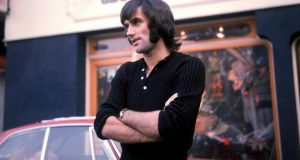 George Best was one of the greatest footballers to ever play in England, but outside of that he was consumed by alcoholism. Photograph: PA

The opening scene is jarring, a reconstruction of a night a woman is making her way to the hospital with her one-year-old son, the torrential rain making driving conditions hazardous. Through the gloom she spots a drenched figure staggering up the road, “drunk as a skunk”. She assumes he’s a down-and-out, or some such wretched soul. Then, as she draws closer, she realises it’s her husband trying to find his way home after being on yet another bender. She drives on. The one-year-old can be fixed, by then Angie Best had conceded George was beyond saving. Their marriage ended soon after.

It’s a harrowing introduction to ‘George Best: All By Himself’, the documentary, partly funded by the BBC and ESPN, directed by Dan Gordon, best known for his 2014 film on the Hillsborough disaster.

Few sportsmen’s lives can have been documented as often as Best’s, the challenge for Gordon, then, to take a fresh look at his story 11 years on from his death, rather than following a well worn path.

And with that opening scene he sets the tone, his take a more rounded one than most. It’s a celebration of a magical footballer, who Hugh McIlvanney memorably described as having “feet as sensitive as a pick-pocket’s hands”, but it also kicks against the common enough narrative that the only one who really suffered as a result of his addiction was Best himself. The truth, of course, is that he inflicted copious amounts of pain on the people who loved him most.

Among them were the two women he married, Angie MacDonald and Alex Pursey, who, along with Jackie Glass, one of his early girlfriends in Manchester, are given a prominent voice in the documentary to talk of their experience of life with Best, inevitably a blend of joy and misery.

That in itself is refreshing, so often the women in Best’s life are portrayed simply as gold-digging leeches who led him astray, “women” often coupled with “alcohol” in the list of afflictions that cursed him. No doubt, there were plenty of his female acquaintances through the years who were just looking for a good time. But then, so was he.

The reminiscences of Glass, who was a model back in the 1960s but is now a Buddhist nun in Edinburgh (the mother of all career shifts) are fascinating, not least when she talks about how deflated Best felt after winning the European Cup with Manchester United in 1968, when the assumption might have been that the greatest achievement of his career, and of his club’s history, would have brought him the most happiness. Instead, there was a despondency, a melancholy, a sense that he could never again feel such a high, that nothing would ever match that night at Wembley. And he was only twenty-two. He had the potential for another 10 years or more at the top of the game, but already it was as if the thrill was gone.

Glass and Best went their separate ways, but almost 50 years on from their time together in Manchester, and over a decade after his death, her affection for him is undiminished. And despite all they endured during their marriages to him, Angie and Alex evidently feel the same. Angie was left to raise their son alone, Alex literally had the bruises to show for her time with Best, but both made their way to Belfast for his funeral to say their farewells.

“It’s not a disease, it’s a choice - disease doesn’t give you a choice,” says Angie of alcoholism, a view not so widely supported now, but one she holds firm based on her experience of being married to an alcoholic. When she resigned herself to the fact that Best would, despite his promises, always ‘choose’ alcohol over her and their son, she called time on their marriage.

“And he drank every day for the next 30 years,” she said, and with that the documentary fast forwards to his funeral, with just a brief recap of those three lost decades thrown in. It seems odd, rushed even, the second half of his life condensed in to mere minutes, but maybe that was right.

It was, after all, a dismal descent towards the day he was laid to rest, the once impossibly beautiful young man blessed with a talent that lit up the lives of those fortunate enough to see him, becoming nothing much more than tabloid fodder as his alcoholism consumed him.

So many low points, perhaps the nadir being the raging debate over whether he deserved a liver transplant, whether he was worthy of a chance of life when his addiction was seen as a death-wish by those who viewed alcoholism as a choice and not a disease.

“God almighty, what’s this,” Paddy Crerand had asked when he first saw the Belfast teenager in training a lifetime before. “That’s George Best,” he was told. Within a couple of years, when he was just 19, he scored twice against the then mighty Benfica in the European Cup quarter-finals and his life changed forever.

No one had to ask his name again. But the footage showed how claustrophobic his life became, Best habitually at the centre of a scrum of reporters, photographers, fans, crowding and crushing his slight frame. If space was hard to find on a football pitch, now that he was a marked man, it was no easier to locate in his life outside the game. “And he had so many hangers-on, it was a joke,” said Mike Summerbee, the Manchester City player who became a good friend in those early years.

For all the joyous, spellbinding footage of Best playing football like few others played it, it’s a draining documentary, the moment the last photo taken of him, as he lay dying in hospital, appears on screen a gut-wrenching one.

“They’ll forget all the rubbish when I’ve gone and they’ll remember the football,” he’d said. Those who loved him most, though, might remember it all, the joy he brought them and the pain he inflicted. A more rounded picture, just as Gordon’s documentary succeeds in presenting.