John Delaney to run for place on Uefa executive committee 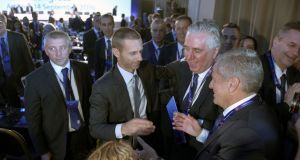 FAI chief executive John Delaney is running for a seat on Uefa’s Executive Committee (ExCo), the organisation’s board, with the Irishman one of 13 candidates for eight seats scheduled to be filled at its congress in Helsinki on April 5th.

A controversial figure at home, Delaney has had many years on various Uefa committees to make contacts and he is currently a member of its National Team Competitions Committee.

He has previously scored some notable successes at European level with, most obviously, the FAI having won the right to host a Europa League final and a portion of Euro 2020 at the Aviva stadium and he did much to ally himself with the organisation’s former president, Michel Platini.

The former international is now banned from football and it is not clear how much, if any, sway Delaney and the Irish association hold with Platini’s Slovenian successor, Aleksander Ceferin, although the 49-year-old, along with quite a few of men he will be running against now, publicly backed the new man.

Either way, Delaney faces some stiff competition in the election and several of the eight vacancies are most likely already accounted for with England’s David Gill virtually a certainty to be re-elected while the likes Michael van Praag (Netherlands) and Marios Lefkaritis (Cyprus) go into the contest with high profiles established after long stints on the ExCo itself and prominent positions on other key committees.

There has not been a member of the ExCo from the Republic of Ireland since 2001 when Des Casey, then a vice president of the organisation, opted against seeking re-election on the basis that it would contravene age limits adopted by the association here. Uefa subsequently followed the FAI’s lead by adopting the same upper age limit of 70 for those seeking election, although the association here recently raised them by five years in order to allow a number of existing board members to run again.

Former Juventus and Poland star Zbigniew Boniek, now president of his country’s national association, is also one of those going forward for the Uefa election while long-time Welsh official Kieran O’Connor is another to have thrown his hat into the ring.

Delaney has been chief executive of the association here for a little more than a decade and while the organisation’s governance has repeatedly come in for criticism during that time, it seems unlikely that that will do him too much damage in a contest where the electorate is made up of other associations.

He had until October last been a member of the Olympic Council of Ireland’s board with its president, Pat Hickey, having publicly identified him as a preferred successor. In the wake of the ticket controversy that engulfed that organisation at the Rio Olympics, Delaney resigned his position as vice president, saying that he had no role in the key decisions made ahead of the Games and stating that he had only attended five of the last 13 board meeting held before last summer.

4 Liverpool leaning on Salah more than ever right now