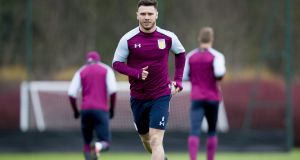 As Scott Hogan would no doubt testify, it sometimes takes rejection to change the course of history. “We wanted to sign him, 100 per cent,” says the Rochdale manager, Keith Hill, “but he just wasn’t ready.”

Almost six years before he completed his move from Brentford to Aston Villa for a fee that may eventually rise to £15m, Hogan’s career was already at a crossroads. The Salford-born teenager had just been released by Rochdale after failing to be offered a professional contract despite some impressive performances for the youth team.

“I was head of youth at the time under Keith and Scott was a young man who was quite aggressive and had a little bit of a chip on his shoulder,” says Chris Willcock, who now manages the Northern Premier League side Glossop North End.

“It was difficult to contain his emotions during matches because he was a very passionate young man. His work ethic at the time wasn’t the best but he’s always had electric pace, just like Jamie Vardy.

“When Scott first came to us he was very raw but he developed quite nicely so I was really surprised when he didn’t get a pro contract at the end. Keith decided against it so he ended up going into non-league - at the time he saw something else in two other individuals and it was up to him to make the call.”

Joining his brother Liam at Woodley Sports - a now defunct club who were expelled from the North West Counties Football League in 2015 for a series of rule breaches - Hogan scored 21 goals in 27 appearances while also working in warehouses and labouring to supplement his £40-a-week wage. He was snapped up by Halifax Town but the presence of Vardy in the pecking order meant he failed to find the net in 14 appearances. Luckily, salvation was at hand in the form of Willcock, who had just taken over at another of Vardy’s former clubs, Stocksbridge Park Steels.

“As soon as I got the job I asked if I could take him on loan, so Scott was my first signing,” he says. “I paired him up with another striker called Jack Muldoon, who ended up going to Rochdale with him. Scott was on the bench at Halifax so I had a chat with him and he agreed to come for a month. He didn’t live too far away from me so we would travel in to training together and struck up a really good relationship.

“We became quite close and I was able to speak to him about all aspects of his game and he was phenomenal for me. When his month ran out he told me he wanted to leave Halifax and come for the rest of the season because he was enjoying it so much and it was a great shop window for him.”

Bottom of the table with 15 points from 20 games, Stocksbridge ended the season comfortably avoiding relegation with 47 points as their forward pairing racked up almost 30 goals between them. “They used to terrify back fours,” Willcock says. “The lads behind would just get the ball forward early because they knew the two up front could catch pigeons.”

Hill, by that stage at Barnsley having ended Rochdale’s 41-year wait for promotion from the fourth tier, made inquiries but once again decided against offering Hogan a professional contract. “We could see the difference,” Hill says.

“During the time he spent in non-league there was a massive realisation from Scott himself that he could miss out on fulfilling his potential. The next time we saw him he was a totally different character - the same ability but his mentality was stronger and he had a more professional approach.”

Hill’s spell at Barnsley did not work out and he returned to Rochdale in January 2013. A few months later, Hogan was invited to pre-season training and was handed his first pro contract. “We knew we had a great chance of doing well because of some of the players we had signed and the way that Scott was applying himself in training,” Hill says. “He’d definitely taken the professional tablet and his skill and speed were vital for us in that promotion campaign.”

“You could say it was third time lucky for Keith,” laughs Willcock, a school teacher who once worked at Manchester City’s youth academy. “It was an example of perseverance from both of us. That’s helped him as his career has continued because he has an edge to his game, which all the good players need.”

Nineteen goals in 40 league appearances saw Rochdale promoted to League One and attracted the attention of several clubs. A bid from Peterborough - who have made a habit of polishing rough diamonds from non-league - was accepted in January 2014 but Hogan decided against making the move, preferring to stay at Spotland until the end of the season.

Leeds also attempted to sign him that summer before Brentford, newly promoted to the Championship, agreed a deal for an initial £750,000 that contained a significant sell-on clause, although Hill insists it was less than the 30 per cent figure that has been quoted.

“When we sold him to Brentford, I predicted Scott would be a Premier League player within 12 months because of his all-round abilities,” Hill says. “It was obvious he had the potential to go on to the highest level so it was my advice to the chairman and the board of directors to include a clause. It’s a really important part of the support system that us smaller clubs need to survive.”

Hogan’s progress was hindered within months of joining Brentford when he suffered an anterior cruciate ligament injury in his left knee during his league debut against Rotherham in August 2014. It would be more than 18 months before he played again after aggravating the injury during his recuperation period but Brentford kept faith and offered him a one-year extension. Seven goals from as many appearances at the end of last season hinted at what was to come and with a full pre-season completed, Hogan found the net 13 times before Christmas to alert Premier League clubs to his talent.

West Ham were the frontrunners to sign him for most of January but pulled out after three failed bids, with Brentford adamant he would not leave for less than their valuation. Despite late interest from Crystal Palace and West Bromwich Albion, Villa signed him on transfer deadline day and were promptly thrashed 3-0 by Brentford to slip below their rivals in the Championship table.

According to Hill it will not be long until Hogan, 24 and who qualifies for the Republic of Ireland through his grandparents, gets the chance to test himself against the best. “Steve Bruce will be surprised by his level of skill,” he says. “I think Villa is a great choice for him - to be honest I still can’t believe that West Ham didn’t take him. I think they’ve missed out big time because Scott has the talent to follow in the footsteps of someone like Vardy. I’m sure Villa will be promoted to the Premier League and Scott will play a big part in that.”

Willcock adds: “He’s not had the same path as Jamie - Scott’s had to work extremely hard to get where he is, especially after the bad injuries he suffered. Now he is getting towards his mid-20s he is becoming the player I always thought he could be. He has a lot of development in him so if he keeps humble and doesn’t get distracted by outside influences, it wouldn’t surprise me if he gets an international call-up one day.”