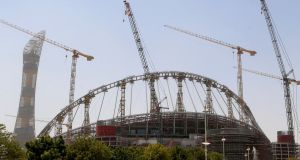 A general view taken August 2016 shows construction at the Khalifa Stadium in Doha, Qatar ahead of the 2022 World Cup. Photograph: Karim Jaafar/AFP/Getty Images

The Irish Council of Trade Unions (ICTU) has urged the government to use its influence at the International Labour Organisation (ILO) to support the establishment of a Commission of Inquiry into working conditions of World Cup related construction projects in Qatar amid claims that reforms announced in December of last year have already been undone.

In a letter sent yesterday to Minister for Jobs, Enterprise and Innovation Mary Mitchell O’Connor, the ICTU’s general secretary Patricia King insists that no significant progress has been made in relation to the rights of migrant workers and that “even cosmetic changes” announced in late 2016 have already been scrapped.

They were, she says, “withdrawn by a decree from the Emir of Qatar on 4th January which re-affirmed the requirement that workers must seek permission from their employer to leave the country.”

King goes on to assert that “false assertions to the media by the government of Qatar that the kafala system has been abolished do not stand up to factual analysis”.

Workers, who travel to Qatar in the hope of securing jobs on the many construction sites relating the 2022 tournament, are still, according to outside observers, required to surrender their passports to employers, obtain permission from their employer to move to another job or to leave the country again. In many cases they also pay large fees to the agents who arrange the jobs, something that effectively leaves them in a position of bondage.

King says the government should support the establishment of a commission given that Qatar was given a year by the ILO in March 2016 to improve the lot of its foreign workforce but that it has completely failed to do so.

It was reported this week that Qatar is spending some €500 million per week on projects relating to the staging of the World Cup although that includes the construction of ports, roads and railways which the country has undertaken in order to modernise the nation’s infrastructure ahead of the tournament.

The country’s finance minister, Ali Shareef Al-Emadi, told visiting journalists that around $200 billion (€187 billion) would be spent on the event and related projects in total. Despite that huge investment, the treatment of migrant workers has consistently caused controversy with terrible working conditions and high numbers of fatalities on sites prompting repeated calls for action by the international community and independent organisations such as Amnesty International.