Public (un)accountability in Irish football? Look across the water 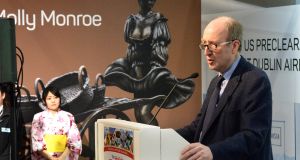 Shane Ross: It is surprising the Minister for Sport does not appear to grasp the extent of his own authority and the need to use it. Photograph: Cyril Byrne

On January 18th the Oireachtas Joint Committee on Transport, Tourism and Sport sat with the heads of the three powerhouses of sport in Ireland, the FAI, GAA and IRFU, to ostensibly debate “sport in Ireland; challenges, strategies and governance”.

The Oireachtas committee singularly failed to address the many governance challenges facing the FAI, focusing only on the important issue of gender representation (the FAI is taking on a female board member to complement the current ten-man board) and only briefly touching on independent directors and age limits, where the FAI had not lowered but recently heightened the bar from 70 to 75 years of age.

CEO John Delaney was also allowed to duck further scrutiny of details of the €5 million ‘loan’ agreed with the former Fifa President Sepp Blatter in 2010, telling the committee that the FAI’s 2015 statement – which set out the series of events so far as the FAI was willing to share them –- was the final word on the matter.

The rest of the questions put to Delaney related to pay levels at the FAI, fan embassies, the new League of Ireland structure, social activity and obesity, concussion, and the size of the World Cup. He was free to answer selectively and was then excused to leave early for another function.

Sport is a force for social good. It is also a public interest, played and viewed by billions. As taxes also help fund national sports organisations, any association that receives public funding is therefore answerable to the public. Cross-party parliamentary committees bear that responsibility to protect and promote the public interest.

The Oireachtas Joint Committee on Transport, Tourism and Sport as a whole – not just one or two members – must therefore come prepared to hold the FAI to account and discuss in depth: independent directors; board and CEO term limits; separations of power between the executive and board; standards of fiduciary transparency where additional income cannot be fudged and where ‘exceptional costs’ are explained; fallouts with independent supporters groups over away-match ticket allocations and the handling of peaceful protests; disputes with the League of Ireland over allocations for development of the domestic game; pay restoration claims of FAI development staff; openness to the press; and addressing allegations of political interference. These are just some examples of topics for scrutiny.

It is also surprising Minister for Sport Shane Ross does not appear to grasp the extent of his own authority and the need to use it, especially after his handling of the OCI following the Rio 2016 ticketing scandal.

When asked whether he could consider making future FAI funding contingent on implementing recommendations, he said he would “look at the details and consider it”.

He and the Oireachtas Committee need only look to the UK to see how things can be done. UK Sport’s 2016 Charter and Code for Sports Governance set out mandatory requirements for receiving public funding. These include transparent board appointment procedures, a minimum of 25 per cent independent board members, maximum 2x4 or 3x3 year term limits, that CEOs may only be non-voting board members, publishing total remuneration for senior staff, publishing annual independently audited accounts, an external evaluation of the board every four years, and “a strategy for engaging with, and listening to, its stakeholders”.

National associations must report on progressive implementation in order to continue to receive public funds. The English FA’s deadline to comply or lose government money is the end of March.

The replication of this model would drastically change the governance of Irish sport within one year. If an association such as the FAI objected to these reasonable standards, it could still function without public funding (around €2.7 million or 6 per cent of its annual turnover) but that is not a position it would like to find itself in. Associations need state support if they have any ambitions of hosting future major sporting events, for example. It is also not good PR.

The UK culture, media and sport committee is also conducting an ongoing inquiry into the system of football governance in the UK related to the code.

It routinely puts hundreds of questions to senior FA figures, and also seeks external perspectives, including from Transparency International.

It secured a debate in the House of Commons on the ‘pale, male and stale’ FA board’s resistance to change, despite the genuine efforts of its independent chair, Greg Clarke.

If, as sport committee chair Damien Collins MP believes, “turkeys won’t vote for Christmas”, then a new bill will need to be brought before parliament to bring the FA into line with UK company law (what Fifa would make of this is another question), as they are “now beyond extra time, they are in Fergie time”.

The need for an independent supporter representative on the board was also consistently raised during the debate. It would be very interesting to hear the FAI’s views on such an idea.

It should be particularly noted by Minister Ross and the Oireachtas committee that the governance challenges of the English FA are no worse than those of the FAI. With any luck, they and perhaps even the Dáil will realise this and start to act properly in the best interests of Irish football and Irish sport.