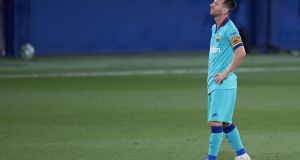 Barcelona have not been champions of Europe since 2015. Five years may not be a long time to most, but to a modern superclub it is a period endured with impatience and irritation.

Barca have had to watch three Real Madrid Champions League triumphs in that spell and they did so while considering their one meagre semi-final. Given it featured the extraordinary 4-0 second leg exit at Anfield last season, all at Barcelona will be forgiven for not considering it too long.

So in this expanded, unique season, it’s five years and counting as an empty Camp Nou awaits Napoli this evening in the last 16. It was 1-1 in the first leg in Naples as long ago as February. Antoine Griezmann equalised Dries Mertens’s opener. Barca had Arturo Vidal sent off.

It means Vidal is suspended for tonight, as is Sergio Busquets and these facts feel like more than team news bullet points a manager passes on. FC Barcelona – mes que un club – is a Catalan institution that stands taller than most but, as with every club, groin strains and goals are its daily currency. The team matters. Sometimes it’s worth remembering.

And the state of Barcelona’s team has been in debate for a while. In June 2015, when Juventus were overcome 3-1 in Berlin, Camp Nou had a recognisably classic 21st century Barcelona side. Juve were strong but Barcelona were a 10-year phenomenon.

The mercurial Andres Iniesta was captain, he had Gerard Pique, Javier Mascherano and Dani Alves behind him and MSN up front – Lionel Messi, Luis Suarez and Neymar. “I think we’ve got a fantastic team, one of the best in this club’s history,” Pique said. And that was before kick-off.

Here, under Luis Enrique, was a continuation of the Pep Guardiola golden era. Even Xavi got 10 minutes from the bench late on. His last-ever Barca appearance. The team was familiar; it was formidable.

Yet amid the familiarity there were new names in Enrique’s squad. The previous summer Barca had acquired Suarez, Ivan Rakitic and goalkeeper Marc-Andre ter Stegen.

They cost €160 million in fees, before salaries. When the following May brought that Champions League, plus La Liga and the Copa del Rey, it was evident Barcelona had invested while powerful, something great clubs have long done. They had also invested wisely, which is the key. Rakitic and Suarez scored the first two goals against Juventus and along with Ter Stegen they still start. (For now – Rakitic may go soon.)

Berlin was a fourth Champions League triumph in 10 seasons and no-one thought Barcelona were stopping. From outside the club seemed to run itself on and off the pitch and even when there were glitches, there was Messi. Given the talent in the building, it was as if the odd smart addition or spring clean would keep things ticking over.

But it hasn’t turned out like that. It is not just that Barcelona have not had a five-year plan, they appear to have mislaid various plans over the five years. After that successful bout of recruitment in 2014, the club has spent lavishly, but it has been on players who have not fitted, or who have fitted only occasionally.

Philippe Coutinho, for example, cost €120 million from Liverpool in January 2018, yet by August 2019 was on loan at Bayern Munich. What had been the plan there? Whose decision was it to buy Coutinho?

Fairly amazingly, Barca have spent €900 million on transfer fees since 2015. They did get over €200 million back for the sale of Neymar to Paris Saint-Germain (plus other incoming fees), but in August 2020, the team is not better than in June 2015. It is reliant on Messi’s genius, Ter Stegen, Pique, Busquets and Suarez.

A fault in Barcelona’s composition is that, ultimately, it always comes back to Messi. He was 27 that early June day in 2015. Today, he’s turned 33. Even a man who can suspend time on a pitch must feel that.

He remains the supreme footballer, and there is a belief Messi will still be a Barca player come 2023-24, but whereas he was once the jewel in the Barcelona crown, over time, and with Guardiola, Xavi, Carles Puyol, Iniesta and Neymar leaving, Messi became the crown itself. He can handle this; he knows his worth. It’s whether other players can, and whether the boardroom at Camp Nou can.

A player of Messi’s historic calibre is a licence to print money. Barcelona had been European champions just once before his club debut in 2003; they have won four Champions Leagues since. They have won 10 La Liga titles since then, too; it was 16 in the 74 years before Messi arrived. The club’s income was €125 million when he joined; this February president Josep Maria Bartomeu said revenue would pass the €1 billion mark soon. Messi has been a transformational figure.

But men like that need paying and Messi is on over €1 million a week. The club shop has to sell a lot of branded pencil cases to cover that.

When Barcelona’s transfer spending is added, plus wages, it is possible to see why the €1billion income might not be quite enough, and why some observers see the great FCB as fragile financially. When Covid struck, Bartomeu’s board applied for Spanish government aid.

Messi, who has had spats of varying heat with the board in the last few years, felt the players would be blamed and isolated by job cuts elsewhere at the club. The squad stepped in to guarantee employees’ salaries. It appeared the board had been undermined.

A new one will be constituted next summer and an idea is that Xavi will return as coach, perhaps with Jordi Cruyff, son of Johan, and Puyol in a new-retro management structure. It could re-make the club differently, but another season will have passed before then and that can look like drift.

Messi, of course, could produce miracles in the next 15 days and Barca could be European champions again, but having lost La Liga to Real after the restart, rather than expectation, there is introspection. An exit to Napoli, who finished Serie A seventh, would bring more.

Drift is not what we associate with 21st century Barcelona, but last year at Anfield was not a one-off – the previous season Barca had taken a 4-1 lead to Roma and lost 3-0. That triumph of 2015 does feel five years ago.

Barcelona will trust it is not 2013 either. That was the last time they lost at home in the Champions League, a reminder of strength. A question never asked back then was if Barca had the capacity to remind themselves.