Solskjaer requires more than Sancho to mount a title tilt 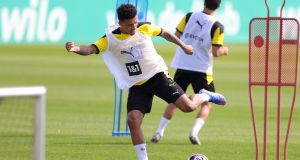 Jadon Sancho’s expected arrival at Old Trafford means United have a golden chance to firmly re-establish themselves as a force – but more reinforcements are still required. Photograph: Friedmann Vogel/EPA

Jadon Sancho has 11 England caps. He was in the Bundesliga team of the season at 19. He makes in-game decisions as prescient as a teenage Wayne Rooney. He is a two-footed, goalscoring assist-maker with a Harry Houdini array of tricks.

Yet if Ole Gunnar Solskjær’s pursuit of the Borussia Dortmund forward is not backed by further transfers, then Manchester United have only a distant hope of being serious contenders next season.

Sancho is an expected €110m-plus signing who has to be the start, not end, of United Phase Two under Solskjær.

Phase One was a rebuild of ethic and talent in the United tradition. A corralling of players of the ilk of Marcus Rashford, Harry Maguire, Anthony Martial and Mason Greenwood, who fitted the culture and could cast off the sluggish mode of Solskjær’s immediate predecessors – José Mourinho, Louis van Gaal and David Moyes – for a progressive style that would garner results.

This ended with United’s third-place finish and could bring success in the Europa League, which resumes today. Phase Two has to be a ruthless build on momentum and Champions League qualification that makes the targeting of Sancho the start of a wholesale strengthening of Solskjær’s squad. Here the prime focus must be the rearguard and, specifically, an unwanted issue bequeathed by Alex Ferguson on retirement in 2013 to Moyes and since unaddressed: central defence.

A frontline with the firepower of Sancho, Rashford, Martial and Greenwood will be of scant use if a faultline that began with the ageing Rio Ferdinand, ran through Daley Blind and continues with the vulnerability of Maguire and Victor Lindelöf to speed is not finally ended.

As a combination Maguire and Lindelöf are not pacy enough against teams who turn them, as Bournemouth demonstrated last month. United won 5-2 but not before Junior Stanislas opened the scoring and the Lindelöf-Maguire axis was torn at through the middle and down the channels.

Just as Manchester City’s powder-puff title defence was down to having only Aymeric Laporte of requisite quality at centre-back, so Solskjær’s side may suffer if Maguire cannot on occasion be paired with a faster partner than Lindelöf or vice versa.

On this the manager says: “We want to be a high-pressing team and if you don’t take risks you won’t improve. Once in a while there’s been some space found behind us but I’m not concerned about it.”

Yet being exposed far up the field would seem precisely why a centre-back who can perform a rescue act is required. Kalidou Koulibaly would be ideal but whether Ed Woodward, the executive vice-chairman, will sanction an €85m-plus deal for the 29-year-old Napoli player to follow the expected €1100m on Sancho remains to be seen.

Related here is a lack of competition in the position. Eric Bailly is injury prone, and although Solskjær’s hopes for Axel Tuanzebe were shown by naming him captain for the Carabao Cup game against Rochdale in September the 22-year-old also struggles to stay fit. Since December 2018 four injuries have cost Tuanzebe 257 (and counting) days of football, and he is unavailable until next term.

The Norwegian may also ponder bolstering at full-back where Diogo Dalot, a Mourinho signing, has struggled to be a substitute. Is Luke Shaw the vibrant attacking force United require on the left? At 19 Brandon Williams has enjoyed a breakthrough year second only to Greenwood’s. He is right-footed so can operate on this flank too, and shows flashes of the verve required. But can he be a performer akin to Liverpool’s Andy Robertson, whose CV shows 32 assists in 151 league appearances?

As at centre-back a headline acquisition in this department – say of Ben Chilwell – would indicate United are serious about a title tilt. Yet given the Leicester man is another potential €85m buy, is the finance available?

Another glaring hole left by Ferguson was in midfield. Solskjær has, though, all but turned the dog days of Tom Cleverley, Bastian Schweinsteiger and Morgan Schneiderlin into a gleaming brightness personified by Bruno Fernandes, United’s player of the season despite signing in January.

The caveat here – however slight – is Paul Pogba. The Frenchman sparkled at times after the restart. For the first time in a long time the 27-year-old appears happy at United. Yet factor in how unsettled Pogba has been during the past two summers and his outspoken agent, Mino Raiola, who has criticised the club, and the player’s future is not 100 per cent certain until the window closes.

If he stays and is content to do so this will mean the serious headache for Solskjær of trying to replace a World Cup winner has not materialised.

Clearer is this: in Sancho’s expected arrival United have a golden chance to firmly re-establish themselves as a force. Solskjær is set to acquire a footballer whose attacking menace is augmented by a mentality that will enhance the side.

When Sancho turned down Manchester City’s new contract offer in the summer of 2017 and left for Dortmund this did more than give United’s crosstown rivals a bloody nose. Sancho also showed a confidence he could thrive in a foreign land. He promptly did.

With him, Solskjær will have added to his leader class that numbers Maguire, Fernandes, Pogba, Nemanja Matic and Martial. Now is the time for the manager to be truly backed.

Sam Bennett realises Tour dream; DeChambeau bashes his way to US Open win
Here is your handy guide to sport on television this week

Seán Moran: Fallout from Tyrone final celebrations will concern GAA 06:45
Eric McNamara hoping Internal Transfer can get the deal done in Kerry National 06:00
Sporting Upsets: The summer that London tore up the script of two and out 06:00
How Dundalk’s opponents Sheriff started on the wrong side of the law 06:00
Pro14 teams need private planes to keep show on the road 06:00