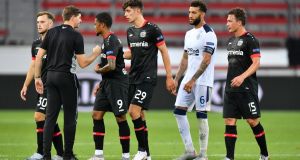 There was no redemption in the Rhineland as Rangers’ Europa League campaign was finally ended by a 1-0 defeat to Bayer Leverkusen.

Steven Gerrard’s team were made to wait five months for another shot at the German giants but the damage done in March’s 3-1 first-leg defeat at Ibrox proved too much to recover.

The coronavirus crisis may have put the second leg at the Bay Arena on ice for almost 150 days but Leverkusen remained red hot.

Gerrard would have loved to have had the option of spicing up his line-up with summer recruits Leon Balogun, Kemar Roofe and Cedric Itten but all three were ineligible.

Instead he opted to give Brandon Barker his chance following an impressive pre-season campaign, while Filip Helander’s fitness levels were also put to the test as the defender came in for the first time since injuring his foot in December’s Betfred Cup final.

Rangers’ game plan was clear. Fall back into the trusty defensive shape which has served them so well through their previous 17 games of this 13-month European campaign before using Barker and Ryan Kent’s pace to spring on the counter.

They had four early chances to test that ploy out but on each occasion a final pass let them down.

The Light Blues needed to be utterly ruthless if they were to grab the three away goals required to overturn the tie but they went in at half-time just grateful that their slick hosts had been in a forgiving mood.

Helander failed to deal with a cross from Lars Bender on 16 minutes and £70million-rated Chelsea target Kai Havertz almost made the Swede pay as he rattled a first-time strike off Allan McGregor’s bar.

Havertz’s quality was clear as he glided across the pitch but he should have netted seven minutes later as Exequiel Palacios sent the playmaker racing through a static Gers defence, only for the 21-year-old to tug wide.

Helander, looking strong despite eight months out, was smarter on his feet two minutes before the break as he leapt in to block at Florian Wirtz’s feet after Leverkusen had hit Rangers on a lightning quick counter-attack.

With sweltering 32 degree heat at kick-off, it had been a taxing first 45 minutes for the Scots as Leverkusen dominated with 70 per cent possession.

And it took the hosts just six minutes to exploit fatigue in the Rangers ranks as Charles Aranguiz spotted Diaby’s run beyond James Tavernier. The French Under-21 ace did the rest, chesting down before rifling into McGregor’s net.

The Gers number one remained resilient, kicking away another close-range Havertz attempt while Connor Goldson was denied a lifeline for Gers when his header from a Borna Barisic free-kick was booted off the line by Edmond Tapsoba.

If this was to be the last time Alfredo Morelos — still the subject of lingering speculation linking him with Lille — was seen in a Rangers jersey, it was a sorry ending.

The Colombian made way for Greg Stewart with quarter of an hour left following a thoroughly ineffective display which just about summed up his 2020 so far.

The full-time whistle brought the curtain down on a campaign from which Gers can still take huge pride after battling through to the last 16 from the first round of qualifiers.

But Gerrard will not have to wait long to see his team back testing themselves in continental action, with Rangers due to enter the new season’s qualifiers on September 17th.

Nervy Wolves booked a Europa League quarter-final with Sevilla after edging past Olympiacos.

Raul Jimenez’s penalty gave the hosts a 1-0 win in the second leg of their last-16 tie on Thursday to progress 2-1 on aggregate.

They will face five-time Europa League winners Sevilla in a one-off quarter-final in Duisburg on Tuesday with a potential semi-final with Manchester United waiting.

Nuno Espirito Santo’s side rode their luck and Mo Camara had a first-half goal ruled out by the tightest of VAR calls against Youssef El Arabi.

They also endured an anxious finale, with Rui Patricio’s fine save denying Ahmed Hassan a leveller.

But Wolves continue to progress in a campaign which started over a year ago in the Europa League qualifiers.

It had been 147 days since the first leg in Athens and the hosts wasted no time in making their mark.

Jimenez lobbed a half volley wide inside the first minute after Joao Moutinho blocked a clearance, with Olympiacos’ defence looking instantly shaky.

It was then no surprise to see them implode after just eight minutes to gift Wolves an opener.

After Ousseynou Ba’s tackle, the ball ran free and hesitancy gripped the visitors’ defence as they waited for Bobby Allain to clear.

It forced the goalkeeper into a heavy touch, allowing Daniel Podence to close him down and Allain, in for the injured Jose Sa, felled the former Olympiacos forward.

From the spot, Jimenez stroked in his 27th goal of the season and he had the ball in the next again soon after but was pulled up after Willy Boly’s foul on Allain.

Olympiacos, the Greek champions after winning the Super League by 18 points, needed to score before they kicked off thanks to Wolves’ away goal.

Patricio saved smartly from Kostas Tsimikas and the visitors’ threat appeared minimal until they gave their hosts a scare after 28 minutes.

El Arabi burst down the right and, with no flag, crossed for Camara to score via a deflection off Boly.

It was a tight call whether El Arabi was onside and, following a lengthy VAR check, the goal was disallowed after it was ruled the striker’s armpit was offside.

It was a wake-up call for Wolves, who had also created little since the goal, and Olympiacos saw more of the ball without exerting any real pressure.

Pedro Martin’s side had gifted Wolves the advantage but refused to let them out of sight and El Arabi miscued a header under pressure from Boly 10 minutes after the break.

Olympiacos remained in the hunt but Podence almost put the tie out of reach when Allain turned his rising drive over just after the hour.

Boly failed to turn in Diogo Jota’s deflected effort soon after as Olympiacos’ search for a goal forced them to open up.

The tension was there, even within an empty stadium, and when El Arabi shot wide, slipping as he pulled the trigger.

Leander Dendoncker replaced Podence as Wolves looked to protect their precious lead and Guilherme almost sent the tie into extra time when his drive whistled over with 11 minutes left.

Two minutes later Patricio was the saviour when his reaction stop denied Hassan’s header after the forward was left unmarked as Wolves squeezed through.

Elsewhere, Sevilla reached the quarter-finals with a 2-0 win over Roma in their one-off last-16 tie at the MSV-Arena.

The Spaniards, who have won the Europa League three times, took control with first-half goals from left-back Sergio Reguilon and Youssef En-Nesyri.

Roma finished the game with 10 men after defender Gianluca Mancini was shown a red card in the closing moments following an aerial challenge on Luuk De Jong.

Basel made sure of their quarter-final place against Shakhtar Donetsk with a 1-0 win over Eintracht Frankfurt. Fabian Frei’s goal with two minutes left gave the Swiss side a 4-0 aggregate victory.

Donegal SFC final postponed until October 7th over coronavirus concerns 18:28
Trump in the rough over playing golf and US Covid-19 fatalities 18:12
Tottenham’s Carabao Cup tie at Leyton Orient off but no decision on walkover 17:45
Digital passport system could ensure horse movements if Brexit deal agreed 15:45
Awarding of 2023 Rugby World Cup to France part of Laporte investigation 16:12

1 Trump in the rough over playing golf and US Covid-19 fatalities
2 Awarding of 2023 Rugby World Cup to France part of Laporte investigation
3 Suarez’ Italian language exam rigged according to prosecutors
4 What next for green jersey hero Sam Bennett after toughest of Tours?
5 Gerry Thornley: Talk of Anglo-French hegemony is over the top
Real news has value SUBSCRIBE
Crossword Get access to over 6,000 interactive crosswords