Phil Jones included along with talented trio from the youth squad, Luke Shaw ruled out 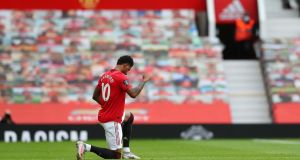 Luke Shaw and Axel Tuanzebe have been left out of Manchester United’s Europa League squad due to injury.

Season-ending injuries have seen the defenders omitted from the Red Devils’ 30-man squad for Wednesday’s last-16 second leg against LASK and the final eight tournament in Germany.

Phil Jones has been included despite not featuring since the restart due to an issue of his own, while Under-18s captain Teden Mengi has been named in the group. He’s joined by fellow youngsters Ethan Laird and Ethan Galbraith.

Meanwhile, striker Marcus Rashford’s policy-changing campaign against child poverty has propelled the footballer on to the front cover of British Vogue’s September issue.

The England attacker forced a government U-turn on the granting of free food vouchers for the poorest families over the summer, and he now headlines a special edition dedicated to activism.

The footballer said: “I’m by no means a politician but I had a voice and a platform that could be used to at least ask the questions. If I didn’t put myself out there and say, ‘This is not OK and it needs to change,’ I would have failed my 10-year-old self.”

The photograph was shot by Misan Harriman, the first black male photographer to shoot a cover of British Vogue in the magazine’s 104-year history. A predominantly black team was on set for the shoot. - PA and Guardian