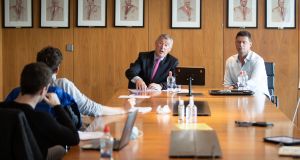 Derry City manager Declan Devine has this week called upon the governing body to police the 14-day quarantine of new recruits travelling from outside of the green list, specifying they should seek documentary evidence, such as flight tickets, to ensure guidelines aren’t being flouted.

The Candystripes boss said he had had to leave four players out of his team for Friday’s game against Sligo Rovers after the FAI had just warned of disciplinary procedures 24 hours earlier. That first League of Ireland fixture of the restart was played at the Brandywell, outside of the Republic of Ireland jurisdiction.

The issue arises in the same week that two players at Waterford FC were sent for testing after displaying Covid-19 symptoms.

While the test of one player has returned negative, the parting comments of Dr Sinéad Fitzpatrick on her resignation as the club medical director on Tuesday night raised questions about compliance.

Waterford and the FAI are awaiting results from the second player’s test before the go-ahead is given for Saturday’s fixture against Cork City.

“We’ll definitely have to think about sanctioning clubs not following the protocols,” Owens said on Wednesday, admitting spot checks on players supposed to be self-isolating are not in place.

“There is no point putting in protocols if they ignore them without fear of sanction. We will come down hard on clubs.

“From an expert medical group, we’re trying to get the dispensation from players from the international and European competitions coming up.

“All of these messages we give out from top to bottom are going to influence international team exposure, European teams and our own National League. If we make any mistakes, there is a huge amount at stake.”

Meanwhile, Owens has admitted that the section of the Memorandum of Understanding (MoU) expelling members with more than 10 years of service on the Association’s senior council has been changed.

Instead of the intended cull clause in the State bailout deal, the 30 of the 79 senior council members in the firing line can reapply under the new fit and proper testing criteria.

“We’ve entirely adopted Fifa’s electoral code which is fit and proper, conflict of interest and skillsets,” explained Owens, while stressing the other fractious facet of the MoU, expanding the independent presence on the board, is non-negotiable with the Government.

“We won’t be targeting individuals on council. The criteria is, ‘are you fit and proper?’ And that means you’ve no history in relation to directors of companies or whatever, you weren’t in prison, whatever all the fit and proper tests are.

“The second one is basically that you have the skillsets to sit. If someone is going to sit on a business committee or a financial committee that they have the expertise or they are a qualified accountant.

“The third one is that they’re not conflicted. So they cannot be involved in some part of the association that’s actually conflicted with the role they are going to play.”