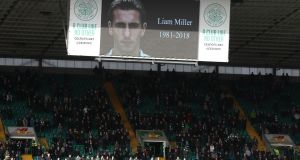 On January 25th 1976, when Paul Ferris was a 10-year-old boy in Lisburn, there was an explosion at the Hibernian Club in the town. The UDA planted the device, on a Sunday, knowing the club would be busy. Two men were killed, John Tennyson, 25, and Raymond Mayes, 33.

The previous Sunday, unknowingly helping his father avoid Mass, Paul Ferris had made his first visit to the Hibs Club.

“As far as your Mammy’s concerned, it’s Mass, son.”

Paul had been introduced to two men that Sunday morning: “I’m Raymond and this is John.”

They were interested in their friend’s son and the name he was beginning to make in local football. A week later they were dead. They each had three children.

“I saw my father crying for the first time,” Ferris says.

There are football books and there are football books. Paul Ferris was a teenage prodigy who became an injured, retired-young professional. He moved into physiotherapy, then qualified as a barrister and had an all-too-brief time in management. He has had a heart attack and, as of last week, was receiving debilitating treatment for prostate cancer. He has some scars. .

Paul Ferris is also very funny, as sharp and smart as anyone you could meet inside football, or outside. He and Geraldine have three children.

You may not know him, or know of him – (I’m lucky to have known him for a while) – but The Boy On The Shed could change that. Ferris has written a book that transcends genres.

Ferris writes with the sort of fluency that, on the pitch, once impressed peers such as Paul Gascoigne. The book is billed as a ‘sporting memoir’ but it is rather more than that. Yes, Ferris recounts going to Manchester United with Norman Whiteside, whom he describes as “an 11-year-old man”, he recalls how Kevin Keegan said Ferris was “the best I’ve ever seen at his age”, and how, at 16, be became Newcastle United’s youngest-ever player in 1982.

There is plenty more football detail – salt and Ruud Gullit, cynicism and Michael Owen. Alan Shearer has written a most personal foreword.

But Ferris has gone beyond standard sports autobiographies. The Boy On The Shed is of a time and place, of Ireland, of Northern Ireland, of growing up a Catholic on a Protestant estate in Lisburn in the 1970s. It is a story of everyday sectarianism and its effects. It is about hate.

Ferris tells of the night his family’s council house was firebombed – “I stood for a moment and watched transfixed by the dancing flames engulfing our ‘good room’.”

It is a scene to reflect upon, a small boy pausing as those around him shriek and scurry, and him later asking the innocent’s question: why?

When Ferris’s parents, are then assaulted by Loyalist marchers, the local UDA commander appears in the firebombed front room to apologise. He said it wasn’t his doing, which he did not say of the firebomb. Paul’s father, Paddy, pragmatically accepts the apology, Paul’s mother Bernadette does not.

Years later worse comes when Paul Bradley, a former boyfriend of Paul’s sister Denise, is beaten to death by the UDA in a bar in Lisburn.

Ferris embellishes none of this. The truth is bad enough.

But Ferris’s story is also, powerfully, about love. Love of his children, love of his wife, of football and of his parents. Given the recollection of Paddy and the Hibs club, there is a sweet memory of peeling potatoes with Bernadette at the sink. It’s Seamus Heaney – When All The Others Were Away at Mass.

The thing about the Ferris version is that this is the first time Paul asks the question: “What’s a Fenian bastard?”

The book’s title stems from Paul’s childhood insecurities concerning his mother’s wellbeing. It is a portrait many Irish boys, and mothers, will recognise. There is a lot of worry.

Amid this, Paul’s gift for football flourishes. He joined Lisburn Youth, a cross-community club formed in 1972 which became renowned for its players. Bob Bishop, who scouted George Best, scouted Paul at Lisburn Youth. Bishop’s letter is here.

Ferris moved to England. He would rather have stayed at home to go to Queen’s University. These are passages to read for any Irish boy or parent considering going across the water. Homesickness, luck, the attitudes of others – talent is only part of it.

Paul had the last of those, make no mistake. But for a knee ligament injury, he could have fulfilled it. That would have led to a different life. It would have yielded a different book, too, though those early sights and sounds would have been the same.

His has been some experience, defying a certain snobbery about sporting autobiographies. They are often deemed formulaic, especially footballers’ ones. Yet how many other professions enable working class boys to tell their story? Kieron Dyer’s book is out soon – how many other books originate in working class Ipswich?

These books offer a window on another world. Paul Ferris spent much of his childhood in Lisburn looking through one. What he saw, how he understood it and didn’t understand it, is gripping.

Sunderland to pay tribute to Miller

Memories of Liam Miller have been numerous and sincere since his shocking death at just 36. The depth of feeling has been apparent.

Miller clearly affected those he met. He certainly affected Celtic fans and if his career did not fly at Manchester United, there were moments on down the line in England, at Leeds and Sunderland, when Miller’s name was a toast, a celebration.

At Southampton in November 2005, Miller was in a Leeds team 3-0 down at half-time. In the 86th minute Miller scored the Leeds winner. It was 3-4 and Alex Ferguson was on the phone telling him to keep it up.

Miller was on loan and soon after, in a dressing room at the Leeds training ground, he spoke quietly of his determination to return to Old Trafford to prove himself. He said he was neither Paul Scholes nor Roy Keane, as he had been marketed to the Manchester public. “I’m my own player,” he said.

Less than a year later, he was with Keane at Sunderland. There, in this month in 2007, Miller scored another late, late winner, a header that beat Derby County, who were then top. It fuelled belief Sunderland would be promoted, which they duly were.

There was a burst of joyous noise that day and for those at the Stadium of Light, it ranks as unforgettable. Hence they will toast Liam Miller’s name with a minute’s applause there on Saturday.

1 Ireland v Scotland: Doris’ day as Caelan set for first cap
2 Gary Lineker: ‘60 is just a number, 70 is the one to worry about’
3 Six Nations: Pundits, journalists and players have their say
4 Rafael Nadal keeps his cool as Nick Kyrgios goes out swinging
5 Ken Early: Klopp adds spice to ‘uninteresting’ FA Cup replays
Real news has value SUBSCRIBE
Crossword Get access to over 6,000 interactive crosswords