All in the game: Mourinho thinks outside of the box-to-box 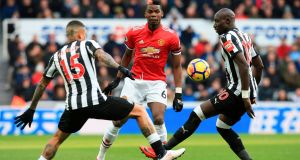 Jose’s off his box

Wayne Rooney said last week that Paul Pogba is “a box-to-box midfielder”. Jose Mourinho disagreed. Our thoughts and prayers go out to those reporters who had to sit through Jose’s box-to-box thoughts on the matter: “I think I understand English enough to understand what you mean by box-to-box, but with some comments from important people in football I got a little bit confused.

They call Jose ‘box office’. Maybe this is why.

As footballing feuds go, it’d be hard to top the sizzle in the ever-rumbling one between Diego Maradona and Inter Milan striker Mauro Icardi, Maradona having sizeable digs at the Argentinian international at every available opportunity. It would appear to date back to Icardi having an affair with the wife of his former Sampdoria team-mate Maxi Lopez, later marrying the woman after her divorce. Maradona believed this to be unforgivable, even though he actually admitted to doing plenty of playing away during his own marriage. None so pure, and all that.

“He is a traitor, you cannot get married to your friend’s wife after having gone out to dinner with them. What he did to Maxi Lopez, you pay for in life,” he said of Icardi, almost losing his mind when the fella was called up to the Argentina squad. “I’d pick [Daniel] Bazan Vera before him,” he said, Bazan Vera being a 43-year-old striker in Argentina’s third division.

He was at it again last week, insisting Icardi should not be in Argentina’s World Cup squad.

“Without a shadow of a doubt, Carlos Tevez deserves to go to the World Cup. We are scraping the bottom of the barrel to find a suitable number nine. Higuain deserves an opportunity, he is worth 10 times more than that shameful Icardi.”

The lad you had to feel sorriest for, though, in this latest rant was AC Milan midfielder Lucas Biglia.

“The real problem with Argentina is the lack of talent behind Messi,” said Maradona. “We don’t have a midfield worthy of note. No offence, but who could’ve imagined Biglia would wear our international jersey even for one day?”

It was only in September that Moroccan international Oussama Tannane (below) joined Las Palmas on loan from Saint Etienne, with a view to a permanent move at the end of the season. How did the move go? Not tremendously well.

The manager who signed him, Manolo Marquez, resigned three weeks after Tannane’s arrival; his successor, Pako Ayestaran, was sacked in November; Tannane got in to a monster bust-up with a team-mate in training, the pair ordered to sit at opposite ends of the dressing room from there on; he was dropped from the squad by Paco Jemez, his third manager in as many months, for being late to a team dinner, and soon after Jemez announced he had no need for Tannane and wanted him to go back to Saint Etienne.

As loan moves go, it wasn’t up there with the best. Still, it had probably been hard for Tannane to resist a move to the Canary Islands. Wait . . .

“I should never have gone to Las Palmas. When I said yes I didn’t even know that the team was on an island.”

“It’s an incredible feeling when you look across the dressing room and see Andres [Iniesta], Leo [Messi], Luis [Suarez] and Sergio Busquets, and everyone else. They are players I used to watch on TV or play with on PlayStation and now I am sharing the same dressing room, it’s incredible for me.”

“We wanted to buy him. Our scouts watched him. But there were big doubts. First, he was too young. Second, it was unclear how he’d adapt to Russia. So we decided against getting him. It would have been around €10 million, probably. Paying so much for a youngster from another continent, you have to be careful with this sort of thing.”

– Former Lokomotiv Moscow president Nikolai Naumov explaining why the club decided against signing a young Brazilian back in 2008. Yep, Neymar.

It’s like trying to stop an oil tanker with a canoe paddle. It’s hard work”

– Mick McCarthy reflecting fondly on the joys of managing Sunderland. It’s 12 years since he had the job, but the scars remain.

0 - A reminder of how many competitive caps the now retired Wes Hoolahan won when he was in his 20s. Weep away.

“We were very deep in the ocean, down in water, so for the first time we put our nose out of water and we breathed a little last week. We start swimming. Between now and the coast is still a long run, we must continue to swim a lot to be safe. Before we were in the deep of the ocean, we only saw fishes, stones and a lot of black things, but we can look to the coast now.”

“We put in Andre Ayew, Tammy Abraham, we had three attackers in the middle. We put all the meat in the barbecue, all the meat inside the grill, because we wish a lot to win the game.”

– Carvalhal again, after Swansea’s win over Burnley on Saturday. At this rate, he’ll need his own quotes of the week slot.

– Jürgen Klopp on living next door to Manchester City.

If your manager isn’t picking you, do you (a) work harder in training, (b) demand a transfer in the next window, or (c) pull a gun on him?

Cesar Pagani, alas, chose (c) when his coach at Argentina’s Escuela Presidente Roca, Cristian Neira, dropped him for a league game. “Pick me or I’ll kill you,” he said, according to Emeterio Farias, president of the Cordoba Football League.

Neira decided this was pressure of an unnecessary kind, so opted to resign.

If Pagani is still at the club when the new coach arrives, you’d guess he’ll be the first name on the team-sheet.

We often see football supporters very brilliantly edit the name and number on the back of their replica shirts after their favourite player sets sail, changing the name to a fella still employed by the club. But this Arsenal devotee, as spotted by @TheTollington, needs to up his game a bit.

Thrifty, yes, but the switch from Alexis (Sanchez) to Alex Iwobi was less than seamless.

1 Gerry Thornley: Saracens very late to apologise for repeated cheating
2 Conor McGregor hails Donald Trump as ‘USA goat’
3 José Mourinho feels Troy Parrott isn’t ready to step up yet
4 Champions Cup final: How to get there, how to get tickets and more
5 As the UK tightens gambling laws Ireland still lags way behind
Real news has value SUBSCRIBE