Job all but done for Arsenal as Ostersund given full attention 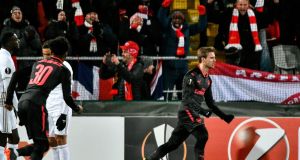 Arsenal’s European ambitions warmed up in freezing Östersund. Arsene Wenger’s attitude has shifted from B-list reserve teams to in-it-to-win-it sharpness now that this competition has reached the knock-out rounds. A fully motivated, high spec team did enough damage to put nine frosty toes into the next round ahead of a return leg in London next week, and afford Arsenal the chance to rest a few players ahead of the Carabao Cup final against Manchester City.

Arsenal meant business from the moment they boarded their flight to northern Sweden with a strong squad, with only those at risk of injury left at home. The sight of Mesut Özil celebrating a goal in what was his first performance in Europe’s bridesmaid tournament since he played for Werder Bremen seven years ago summed up how Arsenal were determined to do this properly, and not take any progress for granted.

This one-sided contest became a sudden and steep learning curve in the uplifting Östersund story. The grandest game in this young club’s meteoric history will have given Graham Potter and his team plenty to learn. The game was the talk of the town, seemingly the entire population of almost 50,000 engaged with the occasion. Yet Arsenal were in no mood to be sentimental. They confidently handled the artificial pitch surface and a temperature that dipped to around -10 with added wind chill, to be expected at a stadium from which the town’s illuminated ski slopes were visible just over the lake covered by its deep snowy blanket.

Arsène Wenger had been conscious that Östersund were not only a smart passing team with a reputation for playing with style, but also had barely conceded a goal in this Europa League run on their home carpet. The line-up, and a focused display, bore full respect to the situation.

It was soon apparent that Östersund’s shortage of experience in a European knock-out tie impacted on the expected dynamic. They sat so far back they invited Arsenal to test out their passing. Maybe a few nerves set in. Perhaps it was hard for the Swedes to click back into their best form after a long winter break. They were drawn deeper and deeper. Mistakes afflicted their game. It wasn’t long before the Premier League aristocrats took the lead. They had already come close as Danny Welbeck headed wide and Henrikh Mkhitaryan’s shot was blocked, and it was the man with a nose for goal, Nacho Monreal, who found his range to canter onto a mistake by the Aly Keita, Ostersund’s jittery goalkeepeer, who spilled a fairly straightforward attempt by Alex Iwobi. Monreal hared onto the scene to steer in the opening goal.

Mkhitaryan gave Keita another fright, rocketing in a swerving, finger-stinging shot shortly afterwards. The Armenian made inroads again in the 23rd minute, fizzing in a low cross from the right in Welbeck’s direction. Sotirios Papagiannopolous got there first, however, and the ball juddered off him and in for an own goal.

Wenger had been mindful that his team needed to master the environment and he urged them to adapt quickly. Their dominance in the opening stages of the game suggested it was Östersund who froze rather than Arsenal.

That influence was demonstrated by the fact it took Östersund 27 minutes to get into a promising position in the opposition box. But that little glimmer lifted them, injected some hope. It was as if suddenly the krona dropped – there were chances to be had if they tried to pressurise Arsenal’s backline. From their next attack Saman Ghoddos lashed in a fine shot from the edge of the area which David Ospina had to be alert to tip over the crossbar. Ghoddos was the Östersund dangerman. Just before half time he snatched possessionas Arsenal dallied and drove in another shot, this time just wide.

The Östersund crowd yelled for a penalty when Shkodran Mustafi bundled Tesfaldet Tekie over but the referee merely waved play on for Özil and Mkhitaryan to sweep up the pitch, exchange passes, and deliver a third goal for Arsenal. Ozil took the plaudits as his shot beat the flustered Keita.

Wenger took the opportunity to give Ainsley Maitland-Niles a chance in his favoured central midfield role. Without being tested too much the youngster did bring positive energy and mobility to that department of the team. The game was also notable for Welbeck leading the line – rusty, having barely played over the past month. Ospina saved a stoppage time penalty from Tom Pettersson and that was that.

Sterner tests await for Arsenal but in this mood they will at least be sure to give the Europa their fullest attention.