Wenger urges change in rule that robs Arsenal of Aubameyang 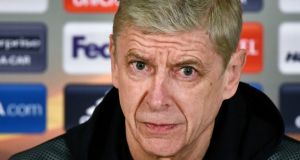 Arsene Wenger: “We are not in the Champions League for the first time for a long, long time so we have to deal with it. That is why we face Östersund.” Photograph: Robert Henriksson/ TT/AP

Arsene Wenger has lamented the archaic rule that has left Pierre-Emerick Aubameyang ineligible to face Östersund in the Europa League on Thursday, and the Arsenal manager has been forced to turn to Danny Welbeck to lead the line in Sweden in the absence of their record signing and Alexandre Lacazette.

Arsenal touched down in snowy northern Sweden to resume their Europa League adventure with a considerably stronger squad than Wenger’s usually rotated selection, with the notable exception of a striker shortage.

Lacazette was set to start until undergoing knee surgery on Monday while Aubameyang stayed in London because he had played for his old club, Borussia Dortmund, in the Champions League this season.

Wenger insisted that, across Europe, clubs “unanimously” think this rule is completely outdated.

“I believe that all the clubs agree now this rule has to disappear in Europe,” he said. “When you look at the transfer amounts you spend now, that you have to spend £50m, £60m, £70m in the middle of the season, that the players cannot play doesn’t make sense.”

Wenger finds Aubameyang’s situation especially bizarre as the Gabonese striker is not available for a competition in which he has not kicked a single ball this season. Under the circumstances Welbeck is the only available senior striker, and the fact he will be supported by Mesut Özil and Henrikh Mkhitaryan is indicative of how much more seriously Wenger is taking the Europa League now than when he was able to coast through the group stage.

“We go into direct knockout so of course the risk is higher,” he said.

Arsenal arrived in these unusual conditions – a 4G artificial surface with a significant wind chill is expected in Östersund – aware that the challenge will be different.

Wenger is full of praise for the way this young club has grown under the stewardship of the Englishman Graham Potter.

“He has done a great job here and is very influential in the way they play football – in a very intelligent way. When I saw them on the tape I understand why they did well against Bilbao and Berlin. It is not a coincidence.

“We have to adapt quickly because we never practise on this kind of pitch. Our technical level should help us to adapt quickly. The temperature at the moment I don’t find a big difference with London. We have cold wind as well so I don’t think it will be a big problem.”

Potter will try to use the conditions to his team’s advantage.

“But it doesn’t really matter, we have to play well. The cold or the pitch doesn’t win you a game. We want to be brave and we want to try and be ourselves on the pitch.”

Potter made no bones that beating Arsenal would be his greatest achievement. “I’ve never got through to the last 16 of the Europa League so of course it will be the biggest. Everything we’ve done, every stage we’ve got to, is new to us. I have complete faith in the players in terms of their ability to deal with the challenge and the opportunity.”

Wenger admitted he never imagined he would play a European match against a team not even formed when he arrived at Arsenal.

“But what is great in life is that it can be bigger than your imagination,” he said.

“If they are where they are today it is because they have earned it through the quality of their work so they deserve to be where they are. If we are where we are it is similar. So we are not in the Champions League for the first time for a long, long time so we have to deal with it. That is why we face Östersund.”

1 Six Nations: Ireland are contenders but England still the team to beat
2 In Donegal Michael Murphy is seen, simply, as a godsend
3 Owen Doyle: Creeping professionalism of schools rugby a threat to the game
4 Mike Catt hopes to have Irish backs purring in Six Nations
5 Here is your handy guide to sport on television this week
Real news has value SUBSCRIBE
Crossword Get access to over 6,000 interactive crosswords