Revenue from League of Ireland broadcast rights is hopeful thinking 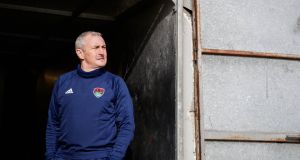 It shouldn’t be a surprise given the determination he showed to ensure Cork City closed the gap on Dundalk then overhauled them last year. But John Caulfield was banging the drum for a much better TV deal again at the League launch on Tuesday.

The Cork City manager’s passion on the subject is persuasive which may be just as well because the numbers do not appear to be entirely overwhelming.

Audience figures for RTE’s coverage of the Airtricity League last season suggest that the numbers tuning in are largely unchanged in almost a decade with Soccer Republic down slightly but holding its own in percentage terms while the 2017 cup final attracted a television audience of 127,000, up from 103,000 back in 2008.

In general terms there is little enough movement over the nine years. Soccer Republic attracted an average of 29,300 viewers for each of its 34 episodes last year, down from an initial 60,000 for Monday Night Soccer when it started in March 2008 but 43,000 as the numbers settled during the latter weeks of that campaign.

That lower figure, more representative of the highlights programme’s regular audience, amounted to three per cent of the available audience for the early evening timeslot in which it was then shown. When Soccer Republic was broadcast at 7pm last year, as it was on eight occasions, the average number of people who tuned in was 34,500, 25 per cent up on when it was shown at 11pm but overall it achieved a 3.5 per cent share in what is a declining market for traditional, mainstream TV.

The comparison is complicated too by the growing significance of online viewing. Episodes of Soccer Republic were streamed an average of 2,400 times each with the various Soccer Republic Extras generating a combined 22,300 viewings.

Back in 2008, the suggestion was that RTE hoped to grow the audience for its league highlights programme significantly and while this has not happened, it has held its ground very solidly.

The figure for the 2017 final represented a 13 per cent share of the available audience. That compares with, say, the station’s coverage of Champions League games involving big English clubs which seem to come in at around the 20 per cent mark. Tottenham against Real Madrid on November 1st, for instance, was watched by 277,000 people (19.3 per cent) while Benfica versus Manchester United on October 18th attracted 275,000 viewers (20.3 per cent) and Liverpool home game with Seville was watched by 301,500 (22.4 per cent).

Those number are remarkably similar to 2008 when the station’s Champions League coverage during the latter part of the year averaged 269,000 while the 2-0 win over Cyprus in October that year was watched by an average of 517,000 compared to 500,000 for the Moldova game last Autumn 866,000 for the win in Wales and 1,039,000 (the broadcaster’s third largest audience of 2017) for the ill-fated second leg of the play-off, a number that amounted to 58 per cent of the available audience.

Bigger events in rugby and GAA attract numbers comparable to major soccer matches with, say, the two All Ireland hurling semi-finals generating audiences of 513,000 and 534,000 while the football final was narrowly ahead of the Denmark game in the 2017 chart and even the Ireland rugby team’s game against Fiji was watched by 454,000.

Caulfield has repeatedly called for more and better television coverage of the Irish club game in recent months and he was particularly put out this week by the way the President’s Cup was treated but there have long been wider suggestions that the league should be able to generate significant revenue for clubs from broadcast rights, something that does not happen at present.

Though the comparison is obviously not like with like due to the superior quality of the Champions League and international match productions packages, the numbers provide little enough support for the contention that a commercial broadcaster would be willing to pay enough for rights to make a significant difference to clubs. Supporters of the GAA, for instance, routinely bemoan the lack of club games carried by the national broadcaster.

A couple of years ago, amid repeated calls for the association to generate some money out of overseas rights to the league, a deal was done with Trackchamp which yielded around €10,000 to each club while making the games available to people who had an active betting account with one of a number of bookmakers.

The deal was coolly enough received at the time and then came in for a good deal of criticism when the league subsequently became embroiled in its biggest ever match-fixing scandal, one that ultimately resulted in the suspension of two Athlone Town players after hugely irregular betting patterns involving an estimated €400,000 were observed overseas on one of the club’s games in the early part of last season.

Eir’s Glen Killane recently reinforced the impression that the league is seen as something of a niche product amongst broadcasters when he said that: “most of the sport you see on free-to-air TV in Ireland doesn’t make money for the channels; it is about having a big audience-gatherer in the schedule, and having a springboard to launch other shows and drive advertising.

“Irish sports fans have been underserved by the free-to-air channels and subscription services such as Sky due to the pressures they are under (to generate big numbers). We are sating a need for more Irish sport which had not been served by the market,” said the Head of Television at the communications firm which is also a significant player when it comes to broadcasting Irish club football.

“There are significant pockets of audiences for the Airtricity League,” he said, “or even something like Schools Cup rugby.”

That’s not a comparison that many League of Ireland fans will have enjoyed. The stations are content, it seems, to fill chunks of their schedules with live games but, at a time when even the Premier league seems to have started to reach its limits on this front, there is little sense, for the moment at least, that they are willing to pay significant amounts of money for the privilege.