FAI comes up with €250,000 to support youth development 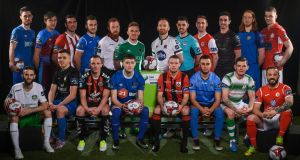 Players at the launch of the Airtricity League. Photograph: Sam Barnes/Sportsfile

Airtricity League Director Fran Gavin says the announcement of €250,000 in FAI support for youth development at clubs around the country is a significant step.

It will go towards creating a viable alternative for aspiring professionals who don’t leave for England, with teenagers increasingly having the opportunity to play at a high level here while developing their education, he says.

Prize money for the coming season remains unchanged but Gavin insists that the new funding is a fairer way of supporting the work being done around the country.

“It’s very hard to compete with the biggest league in the world,” said Gavin at the launch of the new season on Tuesday, “with the one that generates the most revenue. Some of those clubs... I mean, look at Manchester City, it’s owned by a country and the best players are always going to move to the biggest league; the really best players, it happens in every league in the world... Spanish players leave their league to go to England.

“But what we have to do is to look at how we can keep players here longer, how can we keep them playing at a high level while they are here; how we can produce better players, educated players and if we can do that then the reward for those players and the clubs when they do go should be significant and that money that can be reinvested into youth football... that’s the path forward.”

Many clubs have previously complained about the burden they have had to shoulder with the introduction of the leagues at under 19, 17 and 15 levels over the last few seasons with Gavin saying that a recent consultation put the total cost at just about €1.4 million per season.

The money just announced for this season, will bring the total level of support provided to about €1.15 million with the bulk of that, some €825,000, provided by Uefa and the balance provided in the form of existing FAI grants intended to cover the costs of transporting players to and from games. The overall bill, Gavin acknowledges, will increase when the Under-13 league gets up and running next year but steadily, he suggests, the funding shortfall is being narrowed.

“There’s a little gap there and it’ll increase again but the European money will go up too, that’s certainly the trend, and we’ll look to support it more over the next few years. It’s a real focus for the league and one that everyone benefits from.”

The building of bridges between clubs and colleges is, he said, a key element in the association’s plan to provide an alternative career pathway at home but, he admitted there have been some clashes over player availability, an issue that he believes can be resolved as managers come to appreciate the wider benefits of working together.

“It’s a learning process,” he says. “We are looking at the situation and we will be giving talks to most of our managers around what we are trying to do, the benefits of bringing people together. That’s what we have been doing. It was about the league and schoolboy level, now it’s third level and we would feel that there has to be a bit of give and take on both sides.”

Cork City boss John Caulfield, meanwhile, has again been critical of the television coverage that the league is receiving with the manager citing the President’s Cup on Sunday as the latest example, as he sees it, of the club game here being shunted to the broadcasters’ margins.

“We all have a responsibility to talk about our league and promote it. The 27 live games (to be shown this season) is fantastic to have but our season is 36 games and there are lots of cups games. A lot of people here work for the national broadcaster and it’s important for them to talk to the people above them. The standard here is incredible at the top level and we need to promote our league more from within.”

City kick off the defence of their title in Inchicore on Friday evening. RTE have opted to broadcast the sold-out Dublin derby between Bohemians and Shamrock Rovers instead although Cork’s games at home to Bohemians (March 2nd), away to Dundalk (March 9th) and away to Bohemians (April 20th) are all to be shown live in the coming weeks by with the national broadcaster or eirSport.

1 Rodgers shunned by some family members for leaving Celtic
2 Colin Kaepernick’s exile is too fresh for NFL to speak out on US protests
3 IRFU plan gives club rugby hope of return to action this year
4 Connell losing touch with club championship is real tragedy of Normal People
5 ‘A radical departure’: Who are CVC and what are their plans for rugby?
Real news has value SUBSCRIBE