Harry Kane ready to face his nemesis again at Juventus

Spurs star says he will visualise himself scoring against Chiellini 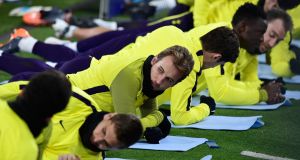 Harry Kane, centre, in training with the Tottenham squad in Turin on the eve of their Champions League match against Juventus. Photograph: Miguel Medina/AFP/Getty Images

Harry Kane remembers the size of the pitch, the cut of the grass and the feel of the stadium. It was a special game for him – his full England debut against Italy at the Juventus Stadium – but the Tottenham Hotspur striker always remembers the details.

It was March 2015, although Kane says it seems like yesterday. Above all, he remembers his first involvement, chasing a ball forward and, in his own words, being “wiped out” by Giorgio Chiellini, the Italy and Juventus central defender in what was a 1-1 draw. Kane had made his senior international debut as a substitute against Lithuania at Wembley four days previously, and had scored after 79 seconds. This was a more sobering introduction.

“It was my first touch and he gave me a dead leg for about 10 minutes,” Kane recalls. “I was a young player coming through, doing really well, and he was obviously a great defender, very experienced. It was a kind of welcome to international football.”

At the time, Kane was living a fairytale, and not only because of his sensational moment against Lithuania. He had broken into the Tottenham team and was scoring goals for fun. A little under three years on and nothing has changed. The 24-year-old’s story continues to feel too good to be true – and he is scoring even more freely.

When he returns to the Juventus Stadium tonight, for the first leg of the Champions League last-16 tie against the reigning Italian champions, he will do so as Tottenham’s leader and principal threat. Chiellini will be waiting.

In many respects their individual battle provides a snapshot of the broader contest: Chiellini, the wily and battle-scarred 33-year-old, against Kane, the young pretender. Juventus have reached two of the past three Champions League finals under Massimiliano Allegri, and they boast other players of the richest pedigree, Gianluigi Buffon, Sami Khedira and Gonzalo Higuaín to name but a few. As Mauricio Pochettino’s Spurs team enter the Champions League knockout phase for the first time, the gap in top-level know-how is plain. For Kane, it is the latest coming-of-age opportunity.

Kane’s respect for Chiellini runs deep. He also faced him in a pre-season fixture last August, when Tottenham beat Juventus 2-0 at Wembley and he scored the opening goal.

“Chiellini is very experienced. He uses his body well and his positioning well. When you try to make runs, he knows when to step across you. He knows when to give you a little nudge to put you off balance.

“He obviously knows when to come tight and get up your backside and also when to drop off. It’s the experienced defenders that are the most difficult because they know where to be at the right times.”

Kane will turn to visualisation before the game. It is a technique he has long employed: picturing the scene and how he will score. “When you’ve played at a stadium before, like I have in this case, you definitely remember the whole feel of it. I’ll be visualising the same sort of occasion but obviously in a Tottenham shirt. I know how big the pitch is. I know what the goals are like.

“I do like to visualise a lot. It’s just about being positive and going into the game with a clear mind. It’s a big stage. It’s where I want to be playing. There will be millions of people watching. I’m on good form personally and we’re in good form as a team. I will visualise myself scoring and hopefully it will come true.”

When we are playing at our best, we can beat anyone. You could say there is a fearlessness about the team. Our recent form just breeds confidence

Kane was asked whether he had visualised himself lifting the Champions League trophy. “Of course,” he replied. “Which footballer hasn’t?”

His confidence – and that of his team-mates – is high. They know the scale of the challenge that awaits, with Juventus unbeaten in 15 matches in all competitions. During the sequence, they have conceded only one goal. As Kane acknowledges, it will be vital to be clinical when any opportunity presents itself.

But Tottenham are fortified by their most recent Premier League results: the emphatic Wembley wins over Manchester United and Arsenal, either side of a positive draw at Liverpool. Rewind a little further and they can point to the home win and away draw against Real Madrid in the group phase of the Champions League.

“When we are playing at our best, we can beat anyone,” Kane says. “You could say there is a fearlessness about the team. Our recent form just breeds confidence. We want the next game to come as soon as possible.”

For the fourth season in a row under Pochettino, Spurs have built momentum from mid-December. Since the 4-1 loss at Manchester City on December 16th, they have gone 12 matches without defeat in all competitions. Kane says one factor is the fitness and conditioning regime that is overseen by the assistant manager, Jesús Pérez.

“This is the stage where all the gym and all the double sessions start to pay dividends and you see the difference between us and the teams below us,” Kane says. “In the last three league games, we’ve really come into them in the second half. The opposition have been tiring and we’ve been relentless. I definitely think we have the fitness to outlast anyone. Our mindset is strong.” – Guardian