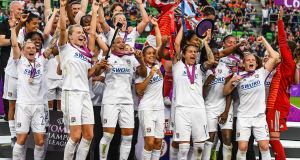 Olympique Lyonnais Féminin are a team that would make Pep’s Barcelona, Pep’s Man City, Zidane’s Real Madrid and many other teams blush with their stellar record: 13 straight league titles and now a four-in-a-row Women’s Champions League, where German and French teams usually share the spoils.

Lyon are well used to a winning culture. Captained by all-time appearance record holder in the Champions League, Wendie Renard, held together in midfield by the super talented Amandine Henry, creative with German captain and extremely talented playmaker Dzsenifer Marozsán and Saki Kumagai, the captain of Japan and spearheaded by 23-year-old Norwegian sensation Ada Hegerberg; it’s hard to see when, how or even if the French club’s domination will come to an end.

Everyone has come to know the Lyon men’s team as a string of homegrown and academy developed players. Think Anthony Martial, Karim Benzema, Alexandre Lacazette and Loic Remy, all prestigious members of the infamous Lyon academy. But, club president and owner Jean-Michel Aulas had other things in mind when developing a women’s team back in 2004.

Aulas wanted to create a Harlem Globetrotters, Los Galacticos, a major equivalent to some major men’s teams who have the greatest in their team. Think New England Patriots or Golden State Warriors. Aulas’s record so far in keeping this promise is immense. Past Lyon players include Camille Abily, Louisa Nécib, Hope Solo, Megan Rapinoe and Alex Morgan. Aulas’s current crop of players are just as talented. But Lyon under Aulas are doing something other clubs and teams just aren’t doing: they are ensuring that both male and female players are treated equally and with the height of respect.

As Lyon prepared for their Champions League final appearance in Budapest, they were, and always are, given the best of everything. From the shared facilities that include the fields, the medical staff, the liaison officers, access to the “mental cell”, designed to help players with the psychological pressures of performing, all the way from the academy to the senior teams.

Lyon even go as far as providing charter jets for the team, VIP access in and out of the airport, as well as six-figure salaries for their players. It is rumoured Ballon d’Or winner Hegerberg is being paid almost €500,000 per year. Aulas attends as many games as possible and the now annual victory trip to St Tropez is included for victorious teams. While the financial support is well and truly obvious, the philosophical and social support is evident too.

The result? The creation of such a high-level football team has almost created world domination with a seriously impressive record. They’ve lost two games in nine seasons. Their goal difference in the last decade is +957. While Lyon’s mean’s teams are current underdogs to Qatari-backed Paris Saint Germain, the women’s team are generally the superstars, the Globetrotters, and their faces adorn walls and billboards by the Lyon stadium.

While Lyon’s complete and utter domination is a bit tedious to watch time and time again, if Man City or Liverpool did this, the back pages would be filled with tributes to a great team

But such success will always bring backlash and resistance. Aulas has been criticised for his aggressive recruitment style, be it financially or on social media. His numerous tweets to win over Morgan got the meme treatment. He even tried courting her by courting other US internationals such as former Lyon player Rapinoe and Kelley O’Hara, by tweeting them “the best American players could play with the best European team: Olympique Lyonnais.” Even record goal scorer Abby Wambach was a target despite retiring in 2015.

Various commentators and football fans believe that an incredibly long period of dominance isn’t healthy, and while Manchester City absolutely steamrolled Watford in the FA Cup final and were praised for it, over in Budapest at the same time, Lyon were smashing first-time finalists FC Barcelona.

Many lauded Lyon and hailed them as the greatest, but it had its doubters. Australian superstar Sam Kerr tweeted about the competitiveness and was met with people agreeing and disagreeing but one thing must be said: while Lyon’s complete and utter domination is a bit tedious to watch time and time again, if Man City or Liverpool did this, the back pages would be filled with tributes to a great team.

Lyon are doing what other clubs have yet to do: they have invested heavily in their women’s side and are now reaping their rewards in an unprecedented manner. While Aulas’s intentions and methods are sketchy and unclear, he has shown the incredible heights a women’s team can reach if they achieve the financial and philosophical support required to do so.

It’s hard to see Lyon’s dominance ever being topped and the question remains who will beat the mighty Lyon, but as Barcelona became financially stable for the first time since 2015 and as English teams are raising the standard non-stop, it is interesting to see how the next few years of women’s European football will play out. But for now, instead of complaining about Lyon’s smash and grab attitude, maybe clubs should be taking note of what can and should be done.