La Liga boss: Man City and PSG should be thrown out of Europe 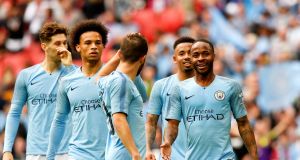 Manchester City and Paris Saint-Germain are “playthings of a state” who should be kicked out of European competition for violating Financial Fair Play rules, the La Liga president has said.

Javier Tebas, who has run Spanish football’s top league for the past six years, also warned English clubs they would be making a huge mistake if they backed a proposed new European Super League as it would “ruin” domestic football.

Tebas reserved his fiercest criticism for Manchester City and PSG, whom he warned were putting the entire football industry at risk because of their massive spending power and behaviour.

“There are clubs who could not care less what their real incomes are when they want to sign a player because they receive incomes from a state,” said Tebas, citing City and PSG by name. “It forces other clubs into an economic situation which is really living on the edge. It skews the balance of the entire European football structure.

“This is no longer sport. This is no longer an industry. It becomes more like a toy, the plaything of a state. And when it’s a plaything, kids start playing with other kids. You end up ruining the entire system.

“Indeed the origin of this entire problem with the Super League is the inflationary effect that Manchester City and PSG have created across the whole of Europe because the rest of the clubs in Europe want money to compete with these guys.”

Manchester City last week reacted angrily after a Uefa investigation into allegations of financial fair play irregularities, which could lead to a Champions League ban, was sent for a final judgment at the governing body.

City argue the investigatory chamber is mistaken and has not fully considered the club’s response to allegations they misstated multimillion-pound sponsorships in their financial fair play submissions more than five years ago.

City said: “Manchester City is entirely confident of a positive outcome when the matter is considered by an independent judicial body. The accusation of financial irregularities remains entirely false and the CFCB IC referral ignores a comprehensive body of irrefutable evidence provided by Manchester City to the chamber.”

Tebas also criticised the big six English clubs for being “dishonest” because they had not revealed their support for a proposed European Super League which could come into effect in 2024.

One proposal, backed by the European Clubs Association chairman and Juventus owner, Andrea Agnelli, could mean the Champions League format is replaced with four groups of eight teams, with qualification based on historical performance rather than results in domestic competition.

Tebas warned that such a proposal would ring-fence the Super League, and its riches, for the biggest clubs – and lead to them playing B teams in domestic leagues as a result, with disastrous consequences.

“There’s a lot in play here but the future of European professional football is at risk,” he said. “This is not a joke what is going on right now. And English fans need to know what every club thinks about this. Because the history of English football and its clubs is in danger. We need to be much more transparent about a Super League.”

Tebas also claimed that a European Super League would not make the big clubs any richer – and would eventually fail due to a lack of interest. “My message to the big English clubs is they are making a big mistake. Because it’s not going to be more money for them. It’s more money for their big players, perhaps. Instead of seven Ferraris, they will have 10.

“I sincerely think that deciding something like this without studying the real economic repercussions is a complete irresponsibility. This is not just me saying these things, there are KPMG studies confirm what I believe.

“But I would also like to say that the Super League model the ECA and Uefa are proposing right now, after 10-15 years it will fail. Because it lacks respect for the domestic component of the system they have created. National leagues have a culture of dozens of years of rivalries between clubs so it’s going to create a disconnect with fans.”

Tebas also warned that La Liga and the other big European leagues would be willing to take legal action to stop a Super League coming into effect – and said he was optimistic that the battle could be won.