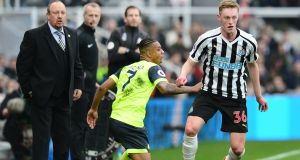 An offer for the midfielder from Old Trafford is expected before the weekend.

Any approach is likely to be immediately rejected with the Magpies determined to keep the 21-year-old.

He signed a four-year deal in December and would cost United over £20million if they convinced Newcastle to sell.

Ole Gunnar Solskjaer is being backed this summer and wants to revamp the squad with younger players after their failure to reach the Champions League.

United are still a draw, despite their on-field problems which saw them finish sixth in the Premier League this season, and would provide a greater chance of success.

They are keen to sign British talent and are reportedly close to signing Swansea winger Daniel James for around £15million.

Longstaff, currently recovering from a knee injury which ended his season in March, impressed after breaking into the Newcastle team.

He only made his Premier League debut in December but started 11 straight games between January and March before suffering knee ligament damage against West Ham.

The injury denied him an expected call up to the England Under-21 squad in March and the chance to make next month’s European Championships in Italy and San Marino.

Newcastle’s focus has been on tying down manager Rafa Benitez, who is yet to sign a new contract despite his current deal expiring this summer.