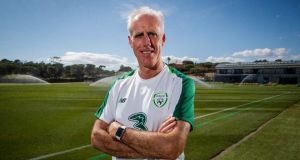 Basking in the Algarve sun, Mick McCarthy could afford to smile when reflecting on his work to date in his second go at the Republic of Ireland job, and suggested Luca Connell could make him that bit happier.

The 18-year-old was the surprise name listed in the 23-man squad for Portugal this week and McCarthy revealed the call-up didn’t result from a straight pick.

Some of Connell’s peers in the emerging ranks were initially considered until McCarthy’s successor nipped in first for his U21 squad.

Now that the defender, comfortable also in midfield, has the eye of the senior manager, there’s every chance that he’ll emulate Jack Byrne’s feat in March by staying on for the more serious stuff next month when Euro 2020 qualifiers against Denmark and Gibraltar are negotiated.

Any prospect of the Bolton Wanderers teen crowning his breakthrough season in the Championship by earning his competitive debut in either game would carry the byproduct of avoiding another Declan Rice fiasco.

McCarthy, shortly after his appointment in December, had made a late, futile bid to keep the West Ham United midfielder in the Irish ranks before he officially defected to England in February.

“Not at all,” said McCarthy, when asked whether England’s interest in the Liverpudlian influenced his fast-tracking.

“I’m not going to stick him on the pitch for a minute just to cap him. Not unless he rips it up here and we all go ‘Wow!’ Who knows?

“It’s up to Luca if he wants to play for us. I’m not getting into that old routine again. I’ve not seen him first-hand but he’s had a good season by playing 15 matches.

“There are a couple of players in the U21 squad like Jayson Molumby and Conor Coventry who I had a good chat with Stephen Kenny about. Those two will be starters for Stephen at the Toulon tournament next week, whereas Luca probably wasn’t. He’s got a holiday booked.”

Another midfielder, Harry Arter, was omitted, it transpired, due to injury. Aston Villa pair Glenn Whelan and Conor Hourihane will join up with the squad in Dublin next week following their playoff commitments, as will Richard Keogh and Josh Cullen.

McCarthy knows the Algarve well, spending a few months of the year there, and isn’t averse to his players enjoying the delights of the region during their six-day stay.

The last Ireland team to visit the area, Giovanni Trappatoni’s class of 2008, soon became familiar with the demands set by the Italian during a rigorous week.

“It will be mixed up and good fun, I think,” McCarthy vowed. “I’ve been managing teams for a long time and know full well it will cause a problem by having players trapped in the hotel all day.

“You can only train so much. We’ll be training twice on Wednesday and Thursday, then give them Friday off before getting back at it on Saturday.”

Away from the sunny climate, back in Dublin the mood amongst FAI staff is decidedly frostier on the back of recent controversies. McCarthy has watched from afar as the saga involving the man who appointed him, John Delaney, rumbles on.

He’s already spoken to Noel Mooney, whose title of general manager is much the same rank as Delaney was supposedly at during his 14 years at the helm.

“We’ve just [had] a brief conversation and he seems a personable guy,” said McCarthy.

“I met him once before and [am] looking forward to working with him, but we’re here and there is no reason for me to be contacting anybody.

“This camp will go ahead without any interaction, running like clockwork.”

1 Ken Early: Liverpool fans, Bamber Gascoigne and a close shave in Istanbul
2 Sideline Cut: Vignette shows why Bird is the true shark in The Last Dance
3 World Rugby study advises removal of reset scrums to reduce Covid-19 risk
4 Coming fourth in the Olympics didn’t change this fearless quartet, time did
5 Argentina rugby great Hugo Porta continues to give back to his beloved game
Real news has value SUBSCRIBE
Crossword Get access to over 6,000 interactive crosswords