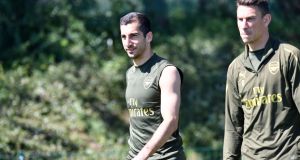 Henrikh Mkhitaryan gathered all his teammates into a huddle before Tuesday training at London Colney to break the news that he would not be travelling with them to the Europa League final in Baku.

The Armenia international’s safety was a concern because of the dispute between his country and the host nation Azerbaijan. After discussions with his family, he decided it was too risky to go to Baku for next Wednesday’s game with Chelsea.

The decision, which was made by the player together with his family and Arsenal, has been a source of upset at the club and Unai Emery then encouraged the squad to win the trophy for their absent teammate.

“It’s bad news,” the Arsenal manager said. “But we cannot do anything for this issue. It’s a very personal decision. We need to respect him. We don’t understand, now, all the political problems. I spoke with Mkhitaryan. He wants to play and to help us. But they spoke, both family and him, and decided to not go. I cannot push him to go. I respect him 100 per cent.”

When Arsenal played in Azerbaijan in the group stage he was omitted from the travelling party due to the conflict between the two countries over the disputed Nagorno-Karabakh region.

There are no diplomatic relations between Azerbaijan and Armenia and Arsenal sought assurances from Uefa about Mkhitaryan’s safety in recent days. Although Uefa and the Azerbaijan FA insist those assurances were given, the player does not feel he can make the trip, nor does he want to add pressure on his teammates before such an important match.

Mkhitaryan, 30, said he is “hurt” to miss the final. He tweeted: “Having considered all the current options, we had to take the tough decision for me not to travel with the squad to the UEL Final against Chelsea.

“It’s the kind of game that doesn’t come along very often for us players and I must admit, it hurts me a lot to miss it. I will be cheering my teammates on! Let’s bring it home Arsenal.”

The attacking midfielder scored in the 2017 Europa League final for Manchester United and turned out for Arsenal in 11 of their 14-game run to the final, so this decision comes as a considerable blow to both player and club.

An Arsenal statement outlined their palpable frustration. “We are very disappointed,” it read. “We have thoroughly explored all the options for Micki to be part of the squad but after discussing this with Micki and his family we have collectively agreed he will not be in our travelling party. We have written to Uefa expressing our deep concerns about this situation. Micki has been a key player in our run to the final so this is a big loss for us from a team perspective”.

A spokesperson from the Azerbaijan FA expressed its regret about this turn of events. “We very much regret this unwarranted decision taken. Whilst we recognise the right to make a personal decision not to travel, we would like to reiterate that as the host country Azerbaijan has provided all the necessary guarantees required by Uefa to ensure the personal safety of Mr Mkhitaryan. There is no reason whatsoever to put in question the seriousness of these guarantees provided by Azerbaijan.”

All in all, it is a sorry situation for an international player to feel the need to abstain from a major final. Mkhitaryan will remain with Arsenal in London as they continue their preparations before leaving for Baku on Saturday. - Guardian