Sarri would rather be sacked than have job depend on final 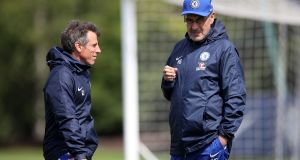 Maurizio Sarri would rather be sacked immediately than have his future at Chelsea hinge upon the result of next Wednesday’s Europa League final, with the Italian under the impression he will hold talks with the club’s hierarchy in the aftermath of their meeting with Arsenal.

The head coach is only 10 months into a two-year contract, which includes an option for a third year, worth £5m a season but has found his position under constant scrutiny despite steering Chelsea to a third-place finish in the Premier League, the Carabao Cup final and a place in next term’s Champions League. His relationship has been strained with a vocal section of a sceptical fan-base, unimpressed at the style of football the team have played, and he has admitted his contact with the owner, Roman Abramovich, has been fleeting.

Chelsea, who are still considering whether to ask the court of arbitration for sport to freeze a two-window transfer ban imposed by Fifa, will not make a decision on the head coach until after the Europa League final. Yet the Italian was riled at the possibility his future could be dependent upon a positive result in Baku.

“If the situation is like this, I want to go immediately,” said Sarri, who has been linked strongly of late with vacancies at Juventus and Roma. “You cannot ... 10 months of work, and then I have to play everything in 90 minutes? It’s not right. It’s not the right way. You’re either happy about my work or you’re not happy.

“My future is Wednesday, I think. I need to think only about the final at this moment. I have two years of contract here, so I have no contact with other clubs at the moment. I have to speak with my club first of all after the final. I want to know if they are happy with me or not. That is it. I have two more years of contract. As I’ve said before, I’m very happy to stay in the Premier League, the most important championship in the world at the moment.

Abramovich saw Sarri in Boston last week as Chelsea beat New England Revolution in a charity match, though they apparently had only a brief exchange centring on the extent of Ruben Loftus-Cheek’s achilles injury. The England midfielder, like Callum Hudson-Odoi, faces up to six months out after undergoing surgery on the ruptured tendon. Antonio Rüdiger will also be absent in Baku with a knee complaint, though there is optimism N’Golo Kanté will be fit. The France international is training again after hamstring trouble.

The final could also prove to be Eden Hazard’s final game for Chelsea after a seven-year stay in England, with the Belgian coveted by Real Madrid, who are engaged in talks over a transfer. The forward has made clear his preference would be to leave, though Sarri would not be drawn on the situation. “I want to respect his decision,” he said. “I hope he will stay with us, but we need to be ready if he will decide something different. And if I have spoken with him, I don’t want to say anything.”

There was criticism, however, at Uefa’s decision to stage the final in Baku, with both clubs struggling to sell their allocations of 6,000 for the event and Arsenal’s Henrikh Mkhitaryan having pulled out because of fears over his safety. The Armenia forward decided it was too risky to travel to Azerbaijan given the conflict between the two countries over the disputed Nagorno-Karabakh region.