Stephen Kenny reveals Ireland U-21 squad for Toulon in June 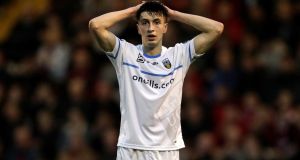 Neil Farrugia is one of three UCD players named in Stephen Kenny’s Ireland Under-21 squad for this summer’s Toulon tournament. Photograph: Laszlo Geczo/Inpho

Barnet midfielder Jack Taylor has been included in Stephen Kenny’s 22-man Under-21 squad for the Toulon Tournament in June. It is the 20-year-old London-born midfielder’s first Republic of Ireland call up.

“I’ve been to see Jack a few times, most recently in the game between Barnet and Brentford, a three all draw. It was an excellent game and he did really well,” said Kenny as he announced the squad.

“He’s a goalscoring midfielder, a number 10, very attack minded. He was previously with Chelsea but has gone to Barnet and played 80 games for them at this stage; it goes to show the different routes that players take. Others look to progress through the Under-23 sides but Jack has played 80 first team games already and you have to respect that.”

The squad also includes seven League of Ireland players including three (Conor Kearns, Neil Farrugia and Liam Scales) from UCD and two (Zach Elbouzedi and Aaron Drinan) from Waterford and both clubs are expected to have the games they are scheduled to play while the squad is together, most likely three in each instance, postponed.

The switches are likely to cause problems for those and the other clubs affected but Kenny is adamant that he is right to call the players up and that the clubs need to live with the consequences.

“I’ve spoken with the managers and I respect their position... you don’t want the league disrupted.

“But on the one side of it there has been this criticism that players have not been getting an opportunity and here we are going to a prestigious tournament.

“I’m open to correction on this but I think the last time a UCD player got a competitive cap at this level was a couple of decades ago so to have three players included is a testament to the work that they are doing. Of course (their manager, Collie O’Neil) has to fight their corner, though.”

The tournament will, he says, give the individual players, and the group as a whole, the chance to test themselves against quality opposition. “Mexico won the gold medal at the London Olympics and the squad they are sending here are their ‘97 age group so next year they will be playing at the Olympics; China are the same while our players are under-20. But we see that as an opportunity. We want to see how they cope with playing up.”