Klopp hails Firmino but wants more from his attack 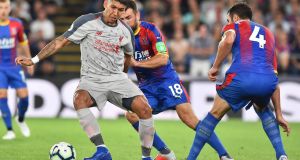 Jürgen Klopp has said Roberto Firmino is “sharper and fitter” than he expected for the start of the season but wants a collective improvement from Liverpool’s attack against Brighton.

Liverpool have scored six goals without reply in their two Premier League wins – their most prolific start since 1994-95 – yet Klopp was unimpressed with his team’s forward play at Crystal Palace on Monday.

“The difference between the West Ham and the Crystal Palace game was not only the opponent but our timing in our offensive situations was not good,” he said. “We did not have the passing option we needed often enough.”

Firmino was quiet by his standards at Selhurst Park, where he suffered cramp late on in the 2-0 victory, but having had only two weeks of pre-season training because of his involvement in the World Cup in Russia, the Brazil international has surprised Klopp with his contribution.

The Liverpool manager said: “I think he’s had a very good start. He had two weeks’ pre-season, which is quite a short one for a player who needs his physical fitness as much as Roberto does but I’m completely happy.

“After two weeks’ preparation and a Brazilian holiday he is much sharper and fitter than I would have expected. He came back in a really good shape. It’s as good as it can be but of course he is involved in all of our offensive situations, even with opening the gap with a run or playing the pass or whatever. It is all fine. It is exactly how it should be and he can improve like we can all improve.”

Liverpool aim to maintain a 100 per cent start against Brighton today and it bodes well that Firmino and Mohamed Salah have yet to hit their stride for a team level with Manchester City at the top of the Premier League.

The champions have also started convincingly but Klopp insists City cannot become a preoccupation for Liverpool in a league that is harder to win than the Bundesliga.

Klopp said: “Here you can give a few more points away and you have to be ready for all the games. I don’t want to compare it but if you could beat Bayern [with Borussia Dortmund] it was good because usually they had won all their other games. That will not happen here. Even City couldn’t do that last year. They got 100 points but that was a rare thing to do.

“Here we have more teams like this [Bayern] . If City are not number one then there will be others going for it. I really think Tottenham will have a brilliant season. They are together still and have a fantastic manager.

“A few other teams have a big chance too. Chelsea look really positive. Arsenal; not a good start but that will change.

“Don’t look at the others, it doesn’t help you. You only have a problem with them twice over the course of the season. Just try to beat them in those two games and then beat the others as often as possible.”

1 World Rugby study advises removal of reset scrums to reduce Covid-19 risk
2 Sideline Cut: Vignette shows why Bird is the true shark in The Last Dance
3 As news gets better, can the pull of The Field be resisted?
4 Coming fourth in the Olympics didn’t change this fearless quartet, time did
5 Premier League return moves closer with clubs to vote on contact training
Real news has value SUBSCRIBE
Crossword Get access to over 6,000 interactive crosswords