Brendan Rodgers: We need to show pride in our defending 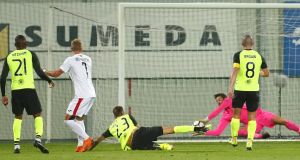 Brendan Rodgers claimed his Celtic side lacked pride in defending after the Hoops lost another avoidable goal in the 1-1 draw against Suduva in the first leg of their Europa League play-off in Lithuania.

Midfielder Olivier Ntcham got the visitors off to a fine start in the ARVI Football Arena when he headed in a Mikey Johnston cross in the third minute.

But Ovidijus Verbickas levelled in the 13th minute with a headed goal from a free-kick into the box which frustrated the Parkhead boss, who lamented poor defending in the 2-1 defeat by AEK Athens last week which ended their Champions League qualifying hopes.

The Northern Irishman said: “We gave away a soft goal. That is a real, real concern now. We are not giving away many chances but we don’t defend the set-piece well enough.

“It’s an away European goal, we go back next week to finish the job, but as I’ve said before I look to the performance level and we weren’t quite where we would want to be.

“We seem to lack concentration. That is a problem for us. And a pride, really, in terms of defending.

“That is pretty clear. In games like this one, especially away from home, we have got to really demonstrate that hunger not to concede. And it was too easy for them.

“It was a terrific ball in, don’t get me wrong, but we have to defend it much better than that. It gave them some oxygen in the game when our start and early goal shouldn’t have.

“I thought we made really hard work of it, to be honest.

“We made a good start, Mikey Johnston showed a great bit of skill and I thought he did well for his first start in a European game. That was the perfect start.

“But after that we came off plan a wee bit. We were running too much, blocking each other’s spaces and not really playing with the tempo and intensity which we want”.

Celtic failed in a recent bid for Aberdeen defender Scott McKenna with the Dons not interested in the reported £3.5million offer.

There is still uncertainty about the future of Dedryck Boyata who was unfit to travel, a week after Rodgers said he had been fit to play against AEK Athens, contrary to the Belgium international’s claim.

Asked how he felt he could solve the defensive woes going forward, the former Swansea and Liverpool boss said: “There are numerous answers to this. Whilst you work with what is here, you have to try and improve it, make it better.

“I felt for the supporters tonight. They have come all the way out there, maybe 200 of them, on trains, buses, the whole thing.

“It’s a disappointing performance from them. Okay, they have seen a goal but we have to be much better.”

1 World Rugby study advises removal of reset scrums to reduce Covid-19 risk
2 Sideline Cut: Vignette shows why Bird is the true shark in The Last Dance
3 As news gets better, can the pull of The Field be resisted?
4 Coming fourth in the Olympics didn’t change this fearless quartet, time did
5 How Mary Pierce stepped into the light and played for herself
Real news has value SUBSCRIBE
Crossword Get access to over 6,000 interactive crosswords