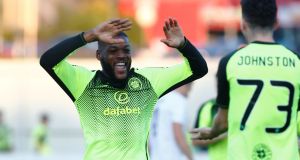 Celtic moved a step closer to the Europa League group stage with a 1-1 draw against FK Suduva in the first leg of their playoff in Lithuania although defensive concerns continue.

Midfielder Olivier Ntcham got the visitors off to a perfect start in the ARVI Football Arena when he headed in a Mikey Johnston cross in the third minute.

However, Ovidijus Verbickas levelled in the 13th minute with a headed goal which would have frustrated Brendan Rodgers, the Hoops boss having lamented poor defending in the Champions League qualifying exit at AEK Athens last week.

Home goalkeeper Ivan Kardum pulled off a series of saves, notably from James Forrest and Johnston, as the visitors dominated the first half.

But Craig Gordon had to make a couple of crucial blocks after the break, with the draw leaving the Scottish champions some work to do next week although they should finish the job off in Glasgow.

With Jack Hendry and Dedryck Boyata out through injury, Rodgers paired Kristoffer Ajer and Jozo Simunovic in the heart of his defence with the latter also pulling up injured soon after the break.

Cristian Gamboa retained his place at the expense of regular right back Mikael Lustig while French striker Moussa Dembele took over from Leigh Griffiths as 19-year-old attacker Johnston was given his first European start.

The picturesque surroundings of a 6,500-capacity stadium which had seats to spare belied the importance of the match to Celtic, keen to re-establish their European credibility.

Many fans were still finding their places when Celtic took the lead with a simple goal, Johnston’s cross from the left picking out Ntcham who headed past Kardum with minimum fuss.

The Parkhead side began to boss the game but were found wanting again in defence in the 13th minute, when an in-swinging free-kick from Vaidas Slavickas, after Kieran Tierney had fouled Andro Svrljuga, was headed in by Verbickas who stole in unmarked at the back post.

Celtic, however, soon regained control. Forrest’s drive from the edge of the box was pushed round the post by Kardum – the corner came to nothing – before the goalkeeper saved a header from Johnston, who ought to have done better with Forrest’s cross.

On the half-hour mark Ajer tip-toed through the home defence before shooting straight at Kardum from 10 yards, the goalkeeper then thwarting Callum McGregor’s close-range strike before ending the half comfortably gathering a Dembele free-kick.

Rodgers was handed another central defensive problem six minutes after the restart when Simunovic limped off to be replaced by Lustig after landing awkwardly on his ankle.

Celtic wobbled for a while and Gordon made a great finger-tip save from striker Rigina Cicilia’s strike from the edge of the box before diving to his right to parry a powerful drive from substitute Julius Kasparavicius, both times the resultant corner coming to nothing.

Griffiths replaced Johnston and Emilio Izaguirre came on for Gamboa in a double substitution as Rodgers tried to get his side back on track.

The Scottish champions began to press with purpose in the final stages and Ajer headed a Griffiths corner past the post in added time but Suduva held out for the draw which had looked unlikely at the start of the evening.