The Portuguese has made clear his frustration over the lack of extra summer signings, 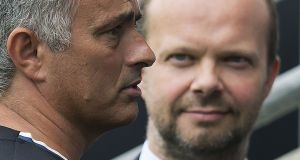 Jose Mourinho: “Of course (our relationship is fine),” he said. “No (problem at all).”

Sunday’s embarrassing 3-2 Premier League defeat at Brighton has left United reeling, with intense scrutiny on the manager, players and background operations this week.

Mourinho curtly brushed aside such talk ahead of Monday’s clash against Tottenham, with the manager surprising reporters by starting his press conference 30 minutes early.

Mourinho gave little away ahead of the Spurs match, answering 13 questions — often brusquely — in a little more than four tense minutes.

The United boss was dismissive when asked whether there had been an overreaction to the Brighton defeat — “you are pessimistic, I’m not” — and curt when asked about his relationship with Woodward.

The Portuguese has made clear his frustration over the lack of extra summer signings, with the failure to improve at the back coming back to haunt them in their last game.

Yet Mourinho refused to talk about the defensive partnership of Eric Bailly and Victor Lindelof in a pre-match press conference as uncomfortable as United’s week.

Odds on Mourinho leaving Old Trafford have tumbled, while a group of fans are said to be planning to have a plane fly over an upcoming match calling for the exit of Woodward.

Questions also remain over the happiness of Paul Pogba, with his agent Mino Raiola this week taking aim at United great Paul Scholes for questioning the France international’s leadership at Brighton.

Pogba admitted his “attitude was not right enough” on the south coast, but Mourinho was distant when asked about it. The United boss said: “If you want any explanation about Paul’s words you must get him and ask him.”

But getting a chance to speak to Pogba appears as easy as it was to get a straight answer out of Mourinho on Friday.

The United boss refused to talk in depth about Tottenham, despite having previously admonished journalists for failing to ask enough about the opposition.

Mourinho was perhaps most forthcoming when it came to the group’s reaction to the Brighton loss.

“Difficult is after the match you lose. (It) is always difficult, especially for people who really care about the job, about being football professional,” he said. “But after that you think about the next match.

Yet not even the gradual alleviation of United’s injury issues could raise a smile.