Liverpool’s owners insist the club is not for sale 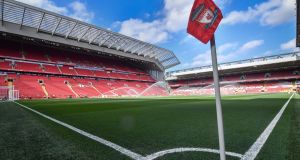 Liverpool’s owners Fenway Sports Group are still open to new outside investment but remain steadfast in their stance the club is not for sale.

However, Press Association Sport understands that interest — one of a number of approaches FSG have received in recent years — did not get past the vetting stage because it was deemed neither credible nor worthy of being put to the ownership.

“FSG have been clear and consistent: the club is not for sale,” said a Liverpool statement.

“But what the ownership has said, again clearly and consistently, is that under the right terms and conditions we would consider taking on a minority investor, if such a partnership was to further our commercial interests in specific market places and in line with the continued development and growth of the club and the team.”

FSG have seen how Premier League rivals Manchester City, despite the backing of billionaire owner Sheikh Mansour, opened themselves up to beneficial investment opportunities after they sold a 13 per cent stake to a Chinese consortium in 2015 for £265million.

They use the services of New York-based investment bank Allen & Company to vet and filter any interest they receive and this approach was no different.

However, it became apparent the interest was not viable as proof of funds were not forthcoming, meaning the approach never got past the discussion stage with the bank and the proposals were not put forward to FSG’s principal owner John Henry and other key figures Tom Werner, Liverpool’s chairman, and FSG president Mike Gordon.

FSG have invested significantly in the club since their £300m purchase in October 2010 with the £115m redevelopment of Anfield’s Main Stand, a £50m commitment to build a new training ground, securing manager Jurgen Klopp on a six-year contract in 2016 and this summer alone spending £170m on transfers.