Burnley on the back foot after tough night in Greece 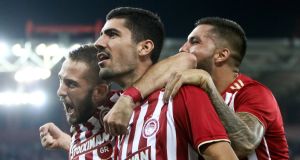 Burnley had Ben Gibson sent off as they suffered a 3-1 loss at Olympiakos in the first leg of their Europa League qualifying playoff.

After Chris Wood’s 33rd-minute penalty cancelled out a free-kick from the hosts’ captain Kostas Fortounis, Olympiakos regained the lead through an Andreas Bouchalakis header in the 49th minute.

And Fortounis then converted a penalty of his own on the hour mark to extend the Greek side’s advantage.

That spot-kick had been given for a handball by Gibson, who was shown a second yellow card – having also been booked for giving away the free-kick that led to Bouchalakis’s goal.

Goalkeeper Tom Heaton was among those coming into the first XI, making his first appearance in just under a year, as Joe Hart dropped to the bench.

The Clarets were playing on a poor surface that they had not had a training session on ahead of the game, using Panionios’ ground instead after Olympiakos were granted special dispensation by Uefa.

And they also encountered a pretty hostile atmosphere at the 32,000-capacity Georgios Karaiskakis Stadium, which had around 1,000 of their fans in attendance.

Sean Dyche’s men looked comfortable enough in the early stages as they made a lively start, winning a couple of corners.

But they fell behind in the 19th minute when play was allowed to continue after a collision between Jeff Hendrick and Lazaros Christodoulopoulos and Phil Bardsley brought down Daniel Podence just outside the visitors’ box, with Fortounis curling the resulting fee-kick past Heaton in fine style.

Gibson and Wood then sent efforts off target, before Slovenian referee Slavko Vincic waved away Olympiakos penalty appeals after Podence went down in the box under the attention of Kevin Long.

Moments later, Vincic did point to the spot, in the other box, with Wood having gone to ground when challenged by Mohamed Camara. The former Leeds striker kept his cool to convert from 12 yards and Burnley were level.

There were more calls from the hosts for a penalty just before the interval as Fortounis’s cross struck Stephen Ward’s arm, but it was not given and Christodoulopoulos was booked for his protests to Vincic’s assistant.

Vincic produced another yellow card shortly after the interval after Gibson gave away a free-kick with a foul on Fortounis, whose subsequent delivery was headed in by former Nottingham Forest midfielder Bouchalakis.

And a nightmare few minutes for Gibson then continued as Vincic judged he was guilty of a handball in the box and booked him again. Gibson trudged off and Fortounis slotted the penalty past Heaton.

Dyche responded to the dismissal by bringing on James Tarkowski for Wood, before Miguel Angel Guerrero shot just wide of Heaton’s goal.

Sam Vokes, who had come on for Johnann Berg Gudmudsson, thought he had netted another away goal in the closing stages but after he bundled the ball over the line the flag was raised for offside.