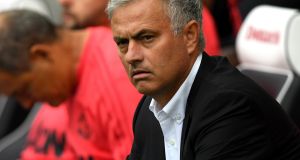 Manchester United’s manager began his Friday media briefing half an hour early – catching out some reporters – and offered staccato answers at best during a terse performance that lasted 259 seconds.

The manager’s display came after one club insider said there had been a bounce about Mourinho during the week despite Sunday’s deflating 3-2 defeat at Brighton & Hove Albion. He was also in jovial mood before the briefing, fiddling with a mannequin in the hallway outside the main conference room at the AON training complex’s Jimmy Murphy centre.

Mourinho’s subsequent attitude, then, can be marked as the latest instalment of the soap opera that is the Portuguese and United. If the dour tone was established on the pre-season tour of the US, Mourinho’s discontent centres largely on him being refused a centre-back of choice in the summer window and having a star midfielder in Paul Pogba who wants to leave.

Ed Woodward, the United executive vice-chairman, refused Mourinho the money to pursue Leicester City’s Harry Maguire and Bayern Munich’s Jérôme Boateng, so the manager was asked whether their relationship was fine.

Cue a curt response. “Of course.” Were there any problems between them? “No.”

The shock reverse at Brighton followed an encouraging 2-1 win over Leicester on the opening day. Pogba was in all-action man-of-the-match form at Old Trafford, then admitted his attitude had not been correct in the second match, a strange state of mind for an elite professional who won the World Cup with France in July and who wore the armband against Brighton. In the absence of the injured Antonio Valencia, Mourinho’s move to make Pogba captain is intriguing given the player’s desire to join Barcelona; he also led the side for the defeat of Leicester. It can be read as shrewd man-management, a head coach trying to bolster a chief asset for the good of the team.

Given this context, Mourinho’s take on the 25-year-old’s “wrong attitude” admission would have been interesting to hear. But, no. Instead, Mourinho was again close to monosyllabic when quizzed on how he feels about it.

“Paul said [this], he has to answer for his words,” he said. “If you want any explanation about Paul’s words you must get him and ask him.”

Another clue to Mourinho’s demeanour was given when someone wondered what his thoughts were about Tottenham. “I’m not going to comment,” he said, becoming possibly the first manager to try to swerve the simple “question about the game” that all press officers parrot when wanting to avoid awkward issues.

Mourinho did, though, answer a follow-up on whether Tottenham’s quality made them the best opponents to try to bounce back against. “You have to play against 19 opponents at Old Trafford and away – you have to play against everyone, [so] I don’t know if it’s the right time,” he began. “The time is now, the fixtures were decided this way and we have to play Tottenham Hotspur in the second match at Old Trafford and then we go away twice in a row to Burnley and Watford.”

I feel we played well against Leicester and we won. I felt we played bad against Brighton and we lost

There was also the following exchange. Had it been a difficult week? “No,” he said. “[It is] difficult after [any] match you lose, is always difficult, especially for people that really care about the job, about being football professionals. But after that you think about the next match. You do the same when you win, you have to move on and focus on what’s next and when you lose you have to do even more.”

How about the background noise following the loss? “Yeah, but don’t ask me because I don’t read,” he said. “I don’t know 10 per cent of what is written, of what is coming on TV screens, so I’m not the right guy to answer it.”

Had there been an overreaction? “You are pessimistic, I’m not.”

A recurring count against Mourinho from fans is United’s style of play, the view being it can be dour. Yet he said: “I feel we played well against Leicester and we won. I felt we played bad against Brighton and we lost. I would like to play well and win. It’s to play well and win, don’t make mistakes – that’s what we want.”

On Monday Mourinho may have Valencia and Nemanja Matic available following injuries. “I don’t know because today is still Friday,” he said. “And we are training Saturday and Sunday, the match is Monday. Decisions to be made on Sunday but yes [Matic and Valencia are] training with the team, [Diogo] Dalot also training with the team for the first time this week so in terms of medical department they are almost free.”

If this was his most optimistic and forthcoming note, Mourinho was back in reluctant mode on the subject of Victor Lindelöf and Eric Bailly as his first-choice central defensive pairing.

“I don’t analyse with you my players,” he said.

All in the Game: Nigeria bite back in war of words with Redknapp 09:00
Colin Kaepernick’s exile is too fresh for NFL to speak out on US protests 07:00
1913: The year the GAA really started to get its house in order 06:00
Ken Early: Ken Early: Why international football is fading into obscurity 06:00
‘A radical departure’: Who are CVC and what are their aims with rugby? 06:00

1 ‘A radical departure’: Who are CVC and what are their aims with rugby?
2 Ken Early: Ken Early: Why international football is fading into obscurity
3 Colin Kaepernick’s exile is too fresh for NFL to speak out on US protests
4 All in the Game: Nigeria bite back in war of words with Redknapp
5 Connell losing touch with club championship is real tragedy of Normal People
Real news has value SUBSCRIBE
Crossword Get access to over 6,000 interactive crosswords