8,000 are present in Helsinki as Mick McCarthy reminds us it’s a results business 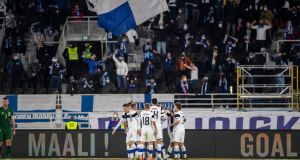 As if our manager and his players hadn’t experienced enough weirdness of late, Helsinki presented them with even more - real, actual people hooting and hollering and spectating from the stands. A whole 8,000 of them. Even the generally unspookable Shane Duffy looked a touch rattled by the spontaneously natural eruptions of football-related hysteria, rather than the fakery that we’ve been used to of late that had unreal spectators celebrating the winning of throw-ins like their team had just raised the Nations League 2020/21/maybe22 trophy.

“What about the social distancing when a goal is scored,” wondered Mick McCarthy. “Do they all just sit there and clap? We’ll see.”

We got our answer in the 66th minute when Fredrik Jensen scored a goal from nowhere. Literally from nowhere for us guffawing at home while watching a replay of Robert Taylor attempting to win a free for Finland at the edge of the box, with a dive that would have had Greg Louganis purring and Graeme Souness condemning swarthy Mediterraneans for bringing that class of skullduggery into our game.

And when the replay was cut off in its prime, there was Ireland all at sea, Darren Randolph’s kick-out having been intercepted by Teemu “Plucky”, as Mick called him, who then set up Jensen who prompted a distinct lack of social distancing in the stadium by inserting the ball in the net. At least the huggers wore masks.

That, as it proved, was the game-winner, putting a severe dampener on an afternoon/evening that had started in a, well, positive manner.

“Have there been any fresh Covid problems today,” a remotely located Guy Havord, still sounding like he was speaking from inside a washing machine, asked Stephen Kenny. “No, not today,” he replied, the fella by now possibly thinking he should be wearing a lab coat rather a gaffer’s suit ahead of match days, him having to evaluate the pandemic almost as much as Luke O’Neill.

Sky then showed us a list of all the players unavailable to Kenny, through Covid-related, injury or suspension reasons, and it was a wonder that he hadn’t had to call up John Giles and Eamon Dunphy for the trip to Helsinki.

“Everything’s gone wrong for him,” Phil Babb conceded, “it’s not fair, is it?” Bloody right it’s not, but as his fellow panelist David Meyler put it, “these games come thin and fast, Stephen hasn’t time to be dwelling on it”. In the thick of it, then, you deal with the cards life throws at you.

Match time and our commentator Rob Hawthorne made mention of Wales’ Gareth Bale and him spending time on the bench during his youth career and Mick chuckled, telling us that he hasn’t spent much time on the bench since. This suggested that Mick watches more of, say, Telly Bingo than he does La Liga, Gareth’s bottom having been stapled to Real Madrid’s bench for much of the past couple of seasons.

Anyhow, the game started and we’re talking groundhog day here, nice football, actually passing the ball to lads wearing the same coloured shirts, a distinct lack of aerial bombardments, but divil a sign of a goal.

Phil and David, though, remained upbeat, liking the football they were seeing from Ireland, while conceding that a goal would be quite nice.

The highlight of the second half proved to be when Mick’s mic went mad, for around 10 seconds him sounding like he was in Guy Havord’s washing machine while soundtracked by the theme from Doctor Who.

And then Jensen scored. “Johnny on the spot,” said Mick, re-baptising Fredrik, “they’ve engineered their own downfall”, his sigh louder than anything produced all night by the actual real people in the stadium.

Rob tried to put up a defence for our lads, a stronger one than they managed for Johnny-on-the-spot’s goal, pointing out that they were playing highly watchable football. Mick, knowing this is a results business, was having none of it. “Whatever about performances,” he said, “I can tell you from experience - you’ve got to win games.”

True. Four games without scoring, now. Altogether, by Zoom, Microsoft Teams or whatever tickles your fancy: ‘All we are saying, is give us a goal.’ When it comes, social distancing will be hard, we’ll hug the bejaysus out of each other.

1 Ireland, France or England? Who needs what to win the 2020 Six Nations
2 ‘This is not a personality contest’ - Jack Nicklaus endorses Donald Trump
3 Galway United replace Cabinteely in playoffs after Wexford win arbitration
4 America at Large: Golfers guilty of legitimising Trump’s toxic regime
5 Football 2020: It’s a knockout revisited – ‘You played, you lost, you went home’
Real news has value SUBSCRIBE
Crossword Get access to over 6,000 interactive crosswords