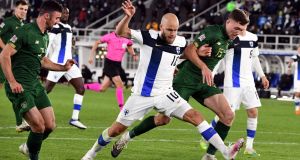 Sloppy goalkick lost Ireland the game. Allegedly made a save in Gibraltar that, if the Sky Sports co-commentator is to be believed, changed the course of Irish history. Rating: 4

Excellent flick on for the Ronan Curtis chance. Seamus Coleman will struggle to reclaim his position in the team but this debate has to keep going because there is little else to live for in pandemic times. Rating: 6

Cleared danger when the dam leaked on a few occasions and continued to practice the art of passing out from the back (at which he’s improving). Rating: 5

Unable to defend a low ball for Jensen’s winner but an impressive senior debut by the young Dubliner with a range of accurate passing that guarantees him plenty more opportunities in 2021. Rating: 6

Hit the crossbar! The simple joy of seeing a natural left back in a system that encourages overlapping runs and quality delivery into the box should keep the 30-year-old Sheffield United veteran in the manager’s plans. Rating: 5

Impressive against Wales and while he dipped slightly here Robbie Brady’s arrival encouraged him to start dashing down the right wing. Only three caps but already looks the part. Rating: 5

Picked for his ability to make the simple pass as the calming anchor in a midfield three. Stephen Kenny’s linchpin. Rating: 5

Mr Anonymous. Shot on 12 minutes was blocked as the Irish goal drought continues but, again, knowing his rare ability, we do not see enough of him in games he should be controlling. Rating: 4

Poor first touch let him down a few times but fit snugly on the right side of the attacking triangle with similar energy to Connolly that gives off the feel of an important squad member. Rating: 4

Honest, tough striker who lacks the size to lead a front three the way bigger men like Adam Idah or Troy Parrott should do in time. Rating: 4

Early comparisons to Robbie Keane are easily dismissed by only scoring four times in 28 appearances for Brighton & Hove Albion but if he starts adding goals to that spiky attitude and those aggressive runs the Galway 20-year-old will become a national treasure. Rating: 6

Robbie Brady arrived but those left foot sparks never turned into a flame. The game was screaming out for Idah but the goal chance fell to Curtis, who was denied by Hradecky’s superb save. Rating: 5

Kenny deserves more respect than Mick McCarthy repeatedly embarrassing himself on commentary, stating “you got to win games” like that epic night in Gibraltar. At least a modern and workable system has been bedded in. Rating: 6