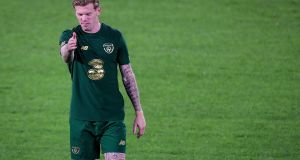 Ireland’s preparations for tonight’s Euro 2020 playoff with Slovakia were thrown into disarray after Aaron Connolly and Adam Idah were ruled out of the game in Bratislava.

Ireland manager described the inclusion of James McClean in the front three as ‘a recent change’ and went on to say that Connolly and Idah were not even on the bench without going into details.

The FAI later announced that a second member of the backroom staff had tested positive for coronavirus. The FAI employee had tested negative before the teams departure from Dublin on Tuesday and the statement said he is asymptomatic and is feeling well. The FAI said that Covid-19 protocols have been executed, with both Uefa and the HSE being informed. The Ireland squad and staff will be tested, as per Uefa protocols, in Dublin on Friday.

McClean is joined in the front line by Callum Robinson aand David McGoldrick. It’s a completely new front three from the defeat to Finland in the Nations League, when Idah, Connolly and Callum O’Dowda filled the front spots.

Kenny has also changed his midfield with James McCarthy lining up alongside Jeff Hendrick and Conor Hourihane, the same trio that started the 1-1 draw away to Bulgaria in the opening Nations League game.

The back four remains the same, with Matt Doherty playing at right back and Shane Duffy captaining the side yet again.

Opposite number Pavel Hapal was able to include returning skipper Marek Hamsik in his starting line-up at the Narodny Stadium, but was without Milan Skriniar and Stanislav Lobotka because of coronavirus restrictions and David Hancko through injury.

You can follow all the action on our Live Blog.