All in the Game: Louis van Gaal’s Man United wishlist 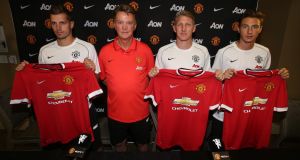 Since departing Manchester United four years ago, Louis van Gaal has done plenty of reflecting on his less than successful spell at the club, largely putting it down to the failure of its owners to spend bigger in the transfer market.

Mind you, he spent over £275 million on 13 players, only four of whom - Anthony Martial, Luke Shaw, Sergio Romero and Marcos Rojo - are still at the club, among his costlier, eh, non-successes Angel Di Maria (£59.7m), Memphis Depay (£31m) and Morgan Schneiderlin (£24m).

But in various interviews since then, he has described those players as his “third”, “fourth”, “seventh” and “eighth” choices. Who did he want? As he told FourFourTwo last week: “I wanted Robert Lewandowski, but when this proved difficult I tried to get Gonzalo Higuain instead. I also spoke with the board about Neymar ..... I also tried to get Sadio Mane and Riyad Mahrez. Thomas Muller was on my wish list, too, and in central midfield I wanted N’Golo Kante. I even tried to sign James Milner .... for the defence, I wanted Sergio Ramos and Mats Hummels.”

“It’s not like we signed Pele or Maradona - we simply brought in a player with certain characteristics that can help us.” Napoli coach Gennaro Gattuso somewhat dampening fans’ expectations of €80 million signing Victor Osimhen.

1,600,000 - That’s the estimated number of Euros Bohemians will receive from the fee Spurs are paying Wolves for Matt Doherty, having included a 10 per cent sell-on clause when they sold him to Wolves in 2010. Tidy work. Or “fairly seismic”, as Bohemians’ chief operating officer, Daniel Lambert put it.

“It is my turn to say goodbye, and I go back to sleep choking, with a bittersweet taste, and chewing the anger of knowing that the effort and the desire to return lacked football.” Marcos Rojo sounding chuffed to be back at Manchester United after the pandemic resulted in him seeing little action during his loan spell with his boyhood club Estudiantes.

“It may not be obvious, but it was difficult to say no.” Guus Hiddink on his very un-obvious latest managerial appointment - he’s the new gaffer of Curacao. The Caribbean island joins the Netherlands (twice), South Korea, Australia, Russia, Turkey and the Chinese Olympic team in the international management section of his CV. Globetrotter.

“I haven’t spoken to Zidane. My French and Spanish isn’t too good. That’s my way out of that one. And I know Zidane’s English isn’t very good from experience.” Ryan Giggs explaining why he hasn’t had a chat with Zinedine Zidane about Gareth Bale being left out in the cold at Real Madrid - it would have been entirely lost in translation.

“The closest Matt Doherty got to a competitive game at Bohs was being an unused sub in a Leinster Senior Cup game against Sporting Fingal in 2009. His move to Spurs will net Bohs £1.2million. The magic of the Leinster Senior Cup.” Journalist Darren Cleary on Bohs’ bonanza.

Prosecutor of the Week

We’ll go with Ioannis Paradissis, the man who secured the conviction of Harry Maguire on charges of aggravated assault, resisting arrest and attempted bribery after that lively night out on the Greek island of Mykonos. That conviction, of course, is now under appeal.

Maguire turned up on the BBC news last week to give his version of events which included a claim that he did not know that the building the minibus carrying him and his friends had stopped outside was a police station.

Over to you, Ioannis: “I would urge all people to have a look at Mykonos police station. It is clearly obvious what this place is either during the day or night. There are many police cars parked outside it at night, there is a sign stating that it is a police station and there are officers coming in and outside of the building. The only way you would not be able tell if it was not a police station is if you are very drunk. Clearly, he was not that drunk, because according to him he was able to fight off a group of men who he thought were kidnappers and try and escape. If he had the clarity of mind to do that then obviously he would have also been able to see that the minibus had pulled up outside a police station.”

And on Maguire’s claim that two “Albanian” men injected an unknown substance in to the arm of his sister? “How did Maguire and his group know that these men were Albanian? Is the Manchester United captain and those with him experts on Albanian culture and people? Do they speak Albanian?”

Wishing Harry the best of luck when he comes up against Ioannis in that appeal.

We’ll go with the person who hacked the site of Brazilian club Cruzeiro last week and posted a highly dramatic bit of news about the signing of a new player. And a quote from the player was even included in the piece.

“I’m very happy to be here with Cruzeiro. It’s a great honour to be a part of [COACH]Enderson Moreira’s team. See you soon, Foxes fans. I can’t wait to play in the Mineirao Stadium!”

Some time later, the ‘news’ was replaced by a statement from the club. “Cruzeiro Esporte Clube confirms that its official website suffered a brief invasion in the late afternoon of this Friday. The attack, however, was quickly controlled and the post was deleted.”

Not quick enough for any Cruzeiro fan who rushed out to buy a Messi shirt.