All in the Game: Michael Hector’s long road to the top 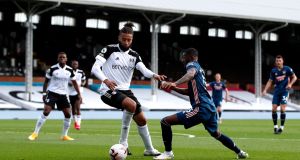 When Michael Hector made his Premier League debut for Fulham on Saturday it completed what must surely be the longest ever journey to playing in England’s top flight.

Then, someone bizarrely, he was signed by Chelsea who sent him on loan to Aberdeen, Reading, Eintracht Frankfurt, Hull City and Sheffield Wednesday, before he joined Fulham in a permanent deal last January. Hector has, then, had spells with 17 clubs (two with Aberdeen) since 2009, has played in four countries and 10 different divisions.

While that 3-0 defeat by Arsenal didn’t make it an ideal debut, Hector’s nickname suggests he should be a decent enough defender for them this season. What is it? Virgil van Mike.

8,588,160 - The number of minutes since Leeds last played in the Premier League before Saturday’s game against Liverpool. Somebody actually counted them.

Ahead of the start of the new Scottish season, Celtic supporter Justin Kelly decided to treat himself to a new jersey, so he went online to the club’s store to put in his order. There was a problem, though, so he emailed them.

“I want to order the home shirt with number 10 on the back with no name but it won’t let me as the ‘name’ box is a ‘required field’. Any way around this? Would I be able to place the order via email?”

The response: “Hi Justin, no problem, just write ‘Blank’ plus your number so the team know not to print a name.”

When the shirt arrived, this was how Justin summed up his feelings:

Yes, the shirt had ‘Blank’ printed on the back.

“We all want David [ALABA]to stay with us because he’s a great guy. But he has a money-grubbing piranha as an agent, and the father is very influenced by him.” Uli Hoeness, honorary president of Bayern Munich, with the mother of all tributes to Alaba’s representative.

“Let’s just say, I have run out of knees.” Poor Nicolo Zaniolo, the Roma forward who ruptured the cruciate ligament in his right knee last January, and the one in his left while playing for Italy against the Netherlands last week.

“22. Fulham.” Sky Sports old boy Richard Keys has such little faith in Fulham’s ability to avoid relegation this season, he’s predicting that they’ll finish 22nd - in a league of twenty.

“Haaland and Gulf.” The rather excellent Irish Sun headline over their report on Norway’s 5-1 win against Northern Ireland in Belfast, during which young Erland Harland - eh, Haaland - Wolffed on the home side’s defensive frailties.

Damien Delaney is not a Stalinist

Usually when people are asked to name their dream dinner guests, living or not, they opt for the likes of, say, Nelson Mandela, Muhammad Ali, Mother Teresa, Pele and Elvis Presley. But when asked by the people who put together the Crystal Palace match day programme to pick his ‘Fantasy Dinner Party’, former Republic of Ireland international Damien Delaney went down an entirely different route. A kind of a despotic one.

“I’m fascinated by Russian history,” he said of his choice of Joseph, “not because I’m a Stalinist, I’m not.”