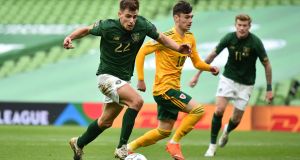 Republic of Ireland midfielder Jayson Molumby runs with the ball during the Uefa Nations League match against Wales at the Aviva Stadium. Photograph: Charles McQuillan/Getty Images

It was reaching a point on Sunday morning, when all that news was filtering through, that you’d have started to reckon that if you turned up at the Aviva Stadium with a pair of boots you’d have made it in to the Irish team for the game against Wales.

That’s 11 players in all, so enough for an entire team, although no goalkeeper. Mind you, we didn’t really need one against Wales, as it proved.

By now Kenny must have been wondering if he had done something in a previous life to earn all this misfortune, (Drogheda United fans: ‘Yeah, bringing all that silverware to Dundalk’), as if that penalty shoot-out against Slovakia wasn’t more than plenty.

“Your plans have been decimated,” Sky’s Guy Havord said to him before kick-off, Kenny well entitled to say ‘yes, yes they have’, but instead he opted for a considerably more upbeat response to the carnage that had befallen his team-selection-plans, pointing to the opportunities it presented to the likes of Kevin Long and Jayson Molumby - or “Mul-umbai”, as Phil Babb insisted on calling him back in the studio, making him sound quite like a large Indian city. (Matt Dough-er-tee and Conor Who-ra-han: ‘Welcome to our world.’)

Anthems time and a reminder of the one of the more catastrophic effects of this pandemic: we can hear footballers sing.

And Mick McCarthy was singing off the very same hymn sheet that he brought to Ireland’s game against Bulgaria last month when he was on Sky co-commentating duty, the one that reads: ‘PUMP IN CROSSES!’

Rob Hawthorne had noted Ireland’s “more patient approach” and their willingness to avoid lumping the ball in to the skies at every given opportunity, suggesting that this was a somewhat “radical” move on the part of Kenny.

This raised Mick’s hackles a bit, and he proceeded to list all the goals (around 96.3 per cent of the most recent ones) that our lads have scored from crosses, mainly during his more recent reign.

“I’m not so sure it’s a new radical approach! It’s passing the ball to each other and trying to get it up the field! I still say the best approach to it for us is getting crosses in to the box, that’s how we score!”

It was at this point that Welsh old boy Danny Gabbidon made a wholly unhelpful interjection: “Ireland put 22 crosses in against Slovakia and didn’t get a goal”.

Anyway, Kevin Long had to leave the field after 25 minutes after Kieffer Moore, who sounds like a trawler, left him with an eye so swollen it looked like he’d just done 12 rounds with Tyson Fury. By now, Kenny would have been glaring at the Gods and asking: “Lads, are ye having a laugh?”

Wales, bedecked in colours that made them look like they’d played New Zealand in the Bledisloe Cup earlier in the morning, gave up plenty of chances, but our boys kept insisting on not taking them, so it was 0-0 at half-time.

It was a similar story in the second half, during which Jack Byrne discovered that not even a pandemic could get him on the field and James McClean got himself sent off, which means if you bring your boots to Helsinki on Wednesday, you’ll definitely get a game.

“Is it a moral point,” Havord asked Shane Duffy at full-time, when it was neither a moral nor an immoral point, it was just a point. A moral victory, though? Well, considering half of Kenny’s squad were sitting at home watching on telly, too right.

And back in the studio, the panel, impressed by the Irish performance, if not the lack of net-busting, reckoned Kenny was entitled to feel content.

“I see loads of positives for Ireland,” said former Welsh international Dave Edwards. An unfortunate choice of words, perhaps, in the circumstances. But in footballing terms at least, there were indeed positive positives, and not false ones.

1 Ireland, France or England? Who needs what to win the 2020 Six Nations
2 America at Large: Golfers guilty of legitimising Trump’s toxic regime
3 Solskjær’s stock is on the rise again after clever squad rotation
4 Football 2020: It’s a knockout revisited – ‘You played, you lost, you went home’
5 ‘This is not a personality contest’ - Jack Nicklaus endorses Donald Trump
Real news has value SUBSCRIBE
Crossword Get access to over 6,000 interactive crosswords