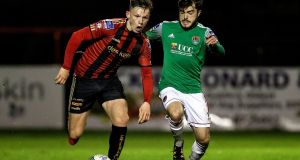 And while catching their arch-rivals looks beyond Keith Long’s Gypsies, this fourth successive victory does seal their ticket to Europe for next year with three games to play.

Colin Healy took interim charge of troubled Cork, without a win now in six games, following Neale Fenn’s departure during the week as they remain rooted to the foot of the table, two points behind Finn Harps with four games left to save themselves.

The visitors were on the defensive from the get-go, Dan Casey’s header from Anto Breslin’s corner tipped onto his crossbar by Mark McNulty four minutes in.

Omochere worked a one-two with Conor Levingston to feed a pass through for Wright who availed of poor defending to side-foot past McNulty.

A mistake from McNulty then gifted Bohemians their second goal four minutes later as the quick-thinking Danny Grant caught him way off his line with a clever lob from distance.

Cory Galvin’s trickery saw him come within inches of getting Cork back into the game, the midfielder dribbling past several defenders before smashing a shot off James Talbot’s crossbar.

Bohemians began the second half as they did the first, stretching their lead with an all too simple goal on 52 minutes.

Devoy looped a deep cross over from the right flank for Wright to head nonchalantly past McNulty.