All in the Game: Coleman following in footsteps of Maldini, Terry and Ramos

The numerical mind of Nicklas Bendtner, Arsenal’s tactics in terms of lions and steaks 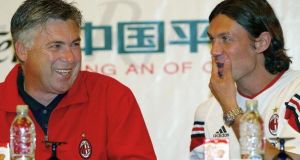 It’s not unheard of, of course, for footballers to have preferred shirt numbers, but the poor souls at Arsenal would have needed a calculator to find one acceptable to Nicklas Bendtner during his time there.

Writing in his new autobiography ‘Both Sides’, extracts from which appeared in the Daily Mail last week, he detailed his search for his preferred number after he returned to the club from a loan spell with Birmingham.

These days, Bendtner is playing his football with Danish fourth tier side Tarnby where, curiously, he wore the number nine shirt on his debut. Sounds like he’s given up on his Ma’s fortune-teller.

“My arms would have given pens away every week” - Peter Crouch, all six foot seven of him, relieved he’s retired in light of the rather harsh new handball law.

That’s how many pounds English Premier League clubs have spent in the current transfer window - and it doesn’t close until 11pm on Monday. So much for belt-tightening.

“I’ve had a lot of captains in my career but how Seamus expresses his love for the shirt is really top. He is a great captain - he is up there with Maldini, John Terry and Sergio Ramos. ” Carlo Ancelotti putting our Coleman in exalted company.

“There was nothing I could do about it - when you’ve got to go, you’ve got to go. Some things you can’t stop.” Spurs’ Eric Dier after having to depart the pitch during the league cup game against Chelsea to have, well, a poo.

“Haroyan was mobilised, like all Armenian citizens under 40, and he is already in the war zone.” The message received by Alexis Kougias, owner of Greek club AEL Larissa, from the agent of Armenian international Varazdat Haroyan, explaining why he wouldn’t be joining the club after all. As excuses go, it was a solid one.

Analogy of the week

The award goes to the one and only Paul Merson for his take on Arsenal’s 3-1 league defeat at Anfield last week.

While he’s very fond of how Mikel Arteta has his team playing football, he reckons their tendency to always play out from the back will hurt them against the better teams - just like it did against Liverpool.

“It’s like going to Woburn zoo next week and walking into the lion’s cage with a lorry load of steaks. You’re going to get eaten alive aren’t you? If you stay in your car you are going to be alright and that’s what it was.”

“I just phoned my mum and my dad and my mum burst into tears.” Dominic Calvert-Lewin on his mother’s reaction when he told her he’d been called up by England for the first time. Bless. Anyone who hasn’t had the fella in their Fantasy Football teams has been in floods too.

“He is very good, one of us can do the fighting and the other can do the biting.” Diego Costa on his new Atletico Madrid team-mate, Luis Suarez. The poor refs.

“It can’t be that hard, he can go and watch Roy Hodgson work or he could bring Sam Allardyce in on a temporary basis. Any of these guys have shaped teams defensively, haven’t they?” Yes, Richard Keys actually suggested on beINsports that Pep Guardiola should hire Big Sam to sort out his leaky defence. He said with a straight face too.