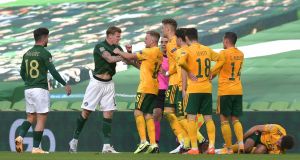 James McClean of the Republic of Ireland argues with players from Wales after being sent off in the Nations League encounter at the Aviva Stadium. Photo: Charles McQuillan/Getty Images

Ireland’s struggles in front of goal continued at the Aviva stadium on Sunday where they had just about the better of their Nations League encounter with Wales but couldn’t find the goal required to eat into Ryan Giggs’ side’s five point lead over them in the Group Four table.

Stephen Kenny had described Thursday’s negotiations over whether Aaron Connolly and Adam Idah could play in that evening’s game as a distraction and though he may have been spared the uncertainty here after a player’s test came back positive on Saturday evening, the loss of five players this time – four of them deemed to be close contacts – meant more enforced changes made after he had settled on his team.

Before the game Kenny said that four of the five missing players – Alan Browne, John Egan, Callum O’Dowda, Callum Robinson and Derrick Williams – would have started. To add to his problems, James McClean will be unavailable for Wednesday’s game in Finland as well, having been sent off towards the end for a late tackle which resulted in a second yellow card while Kevin Long and Jayson Molumby will be doubt after both went off injured.

The recently appointed manager might be forgiven for wondering just what he has gotten himself into.

In the circumstances, Ireland still played quite well although you do have to forgive them the fact that they again managed next to nothing in the shots on target column. Goalscoring, it seems, is still very much a work in progress and most of those with the potential to do it were unavailable to the manager.

Kenny started here with the 4-2-3-1 formation he had switched to in Slovakia with Kevin Long, Jayson Molumby, Robbie Brady and Shane Long all drafted in.

With Gareth Bale and Joe Allen both missing, Wales were not quite at full strength either although hopefully Giggs didn’t make the mistake of mentioning that to his opposite number if they ran into each other before kick-off. Aaron Ramsey was back to captain the team though and he added quality in attack where the visitors looked dangerous pushing forward from midfield towards the box, but just a little toothless themselves once they got there.

Much like Bratislava, the two sides seemed to have the measure of each other for stretches but Ireland’s evolving new approach was again evident at key moments such as when McClean and Enda Stevens combined really well to play themselves out of a tight spot late in the first half. The left back ultimately fed Matt Doherty whose long but clearly targeted ball suddenly put the visitors on the back foot as Jeff Hendrick advanced.

It all came to nothing but had far more potential than sending something hopeful up the left flank or just into the stand ever would have.

If Kenny thought that his long list of challenges in what was just his fourth game in charge was complete then he was put right 25 minutes in when Kevin Long, still suffering after the blow to the head he had taken from Kieffer Moore a few minutes earlier, had to be replaced by Cyrus Chistie. Doherty, who must have grown weary these last few years assuring us that he could, and would, happily play in either full-back slot or wide in midfield, was shifted to left centre back where his passing ability stood to him, some his defensive weaknesses not so much.

Ireland were perhaps lucky not to concede a penalty or two with Darren Randolph appearing to clatter Ethan Ampadu as he sought to regain control of a corner he had dropped, and Christie getting away, it seemed, with what the current rules deem to be a handball despite the defender having known little about it.

The second one would certainly have been harsh given the lack of intent, something the home side was showing a good deal of towards the other end of the field with Christie one of those to try his luck from distance. Robbie Brady looked to be the team’s most menacing presence but he fluffed Ireland’s best opportunity of the opening hour 33 minutes in when McClean found him in space and he ran at Joe Rodon.

When he checked the run, McClean was arriving to his left but Shane Long, who had just raced past him to the right with Ben Davies struggling to keep up, looked by far his best option. The Dubliner chose to shoot instead, though, and while it wasn’t entirely unreasonable in the circumstances, he failed to hit the target.

He also failed to make the run Long expected a little later after Molumby had done well to feed the striker on the edge of the area and so the afternoon dragged on with Ireland all energy and enterprise but incapable again, it seemed, of making an opposition goalkeeper put a bit of a shift in. Indeed it was 81 minutes in before Wayne Hennessey was required to make an actual save and that was from a long range Hendrick effort that was hit almost straight at him.

Long headed one over and Daryl Horgan also missed the target from close range. Those inclined to see the glass as half full will reflect positively on all the chances created but Kenny must wonder when, even allowing for all the obvious circumstances, somebody is going to start sticking them away.