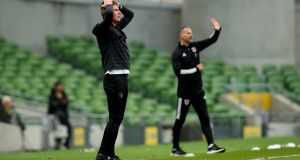 Stephen Kenny expects to draft in reinforcements ahead of the trip to Finland after losing James McClean to a red card during Sunday’s scoreless draw with Wales and emerging from the game with injury concerns regarding Kevin Long and Jayson Molumby.

Kenny was already without a total of seven players who were unavailable to play at the Aviva because of the ongoing impact of coronavirus on the squad while David McGoldrick and James McCarthy had been ruled out by more run of the mill injuries.

“There’s no doubt it has been difficult,” said the manager shortly after the game. “It was close to midnight when we found out last night. We had to change a lot of stuff today. It was a 2pm match. We were leaving the hotel early enough. It all had to be sorted out before breakfast. But the players’ attitude was just brilliant, they showed their professionalism by performing to the level they did.

“We lost three centre halves today alone,” he continued, after expressing concern for the players directly affected, “two in the morning and Kevin Long after a short period of the game. Matt Doherty came in and done brilliantly there. It shows there’s a bit of depth to what we are doing.

“I’m not saying the balance of the team was perfect - from an attacking point of view. There was a lot of pace missing from the front line but everyone who played today acquitted themselves really well.

“Overall, we could have won the game, it was an evenly balanced game, I don’t remember Darren (Randolph) having too much to do and we had the better chances. Considering the 120 minutes the other night, the flights, everything else that went on, it speaks volumes for the players.”

Asked if he believes November’s international games will even be allowed to go ahead given the number of Covid-19 related issues in different squads across Europe, the Dubliner admitted that he can’t really be sure at the moment but expressed the view that sport is more important than ever to society right now.

“I think, it’s an interesting question. I’m sure everything will be reviewed but ideally, you don’t want life to be interrupted. Sport is very important, football is the most participated in sport in the country and the Irish national team is a very important part of Irish sporting life. We don’t want that to be diminished but there are serious challenges and a lot of anxiety with a lot of the clubs so I’m sure it’s something for everyone to consider.”

The attitude of clubs might prove a factor in who is called into the squad for the game to Finland. With the staff member who tested positive in Slovakia having since tested negative twice, Aaron Connolly and Adam Idah should technically be available again although given the developments since, it is far from certain that Brighton and Norwich would want them to travel.

The other obvious option is to take players from the under-21s with the names of Dara O’Shea and Jason Knight being mentioned as those who might be promoted but more might yet be required as the situation remains uncertain ahead of another round of tests for the players already present on Monday.