All in the Game: Bohemians forced into awkward apology 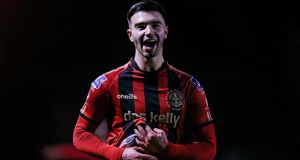 Apology of the week

Well, there’s no contest, is there? That would be the one Bohemians had to offer their midfielder Danny Mandroiu after they inadvertently issued team news for their game against Dundalk that had just been an internal WhatsApp “joke”.

Mandroiu, understandably, wasn’t amused. “Regarding the team news that @bfcdublin sent out earlier, what was said was completely untrue. I am out injured at the moment. I’m sure you will hear this from the club too eventually but I just wanted to clear that up for myself and my reputation.”

What had been that team ‘news’?

“You cannot compare humans to aliens. We can say that Maradona is the God of football and that Messi is the best of the humans.” Diego Maradona Jr. . . so he would be just a touch biased.

28,800 - That’s how many pounds Alexis Sanchez earned for each touch of the ball during his Manchester United, eh, career, according to the calculator of football writer Duncan Alexander.

The BBC brought us an outstanding transfer update last week with the news that Ross County had signed goalkeeper Ross Doohan on loan from Celtic. This, they said, had resulted in their three first team goalies all being called Ross - Doohan, Ross Laidlaw and Ross Munro. Add in midfielder Ross Draper and striker Ross Stewart and that’s a whole lotta Ross’s in one squad.

“Is this the most exceptional piece of nominative determinism we’ve ever come across (or at least since that time Peter Hartley and James Poole both scored for Hartlepool against Notts County in 2013)?” asked reporter Ciaran Varley.

But by visiting the Ross County website, like you do, he’d have learnt that there’s even more Rossness going on at the club. Their fourth-choice goalkeeper is also called - wait for it - Ross, Logan in this case. And in their youth ranks they have a Ross Hardie, Ross MacLeod, a Fergus Ross, a Fraser Ross and a Jack Ross.

All of this led to one of the finer 44-word match reports we’ve ever read, as produced by ESPN’s Dale Johnson: “Ross County have signed goalkeeper Ross Doohan on loan from Celtic. Ross Doohan was on the bench tonight vs. Motherwell. Ross Laidlaw started with Ross’ other keeper, Ross Munro, missing out. Ross’ winning goal was scored by Ross Stewart, while Ross Draper came on.”

“Pique is a second-rate player. He’s good looking, he’s with the singer [SHAKIRA], he has a cool beard, but if he played for Valencia, he wouldn’t be well known. He’s like me - bang average.” At least former Real Madrid defender Oscar Ruggeri managed to be self-deprecating while shredding poor Gerard.

“Since my time at Barcelona there have been 20 players that have come on to the scene and people have asked if we can compare him with Messi. 20 players. He’s just one more on the list.” Pep Guardiola on being asked if Karim Benzema was at Leo’s level. That’s a no, then.

“You did better than anyone, dear brother. I’m proud to see you play and to see your dedication, but unfortunately you can’t do everything alone.” Cristiano Ronaldo’s ever loyal sister Elma Aveiro blaming his 10 Juventus team-mates for their Champions League exit at the hands of Lyon.

“I don’t think directors of a top level club will make a decision based on one match. They are going to evaluate the whole season. I find this kind of question offensive. . . I have a contract, I’ll respect it.” Maurizio Sarri dismissing questions about his future at Juventus after their Champions League exit. Next day? Yep, fired.

“I could mark Messi only in my dreams - or on my son’s PlayStation.” Napoli coach Gennaro Gattuso before Saturday’s Champions League game against Barcelona, during which his defence could only mark the fella in their dreams.

More than a few have noted that the one advantage of not having crowds at football games these days is the absence of racist abuse being hurled at players. But hold your horses. A headline from goal.com last week:

To which you could only say: ‘What?’

“During the game,” read the report, “a song was broadcast over the stadium speaker that uses the term “monkey” in reference to fans of Esporte Clube Pelotas’ rivals, Brasil de Pelotas.”

The club explained that they had hired a company to play songs through the game with “the sole purpose of encouraging our players”, but “unfortunately, they also inserted provocative songs directed toward the opposing club”.

“As a result, Esporte Clube Pelotas presents a respectful apology to the sportsmen, fans and professionals of the two clubs who felt offended and to the general public.”

They could now be fined and docked points, as well as having the task of finding a new DJ.