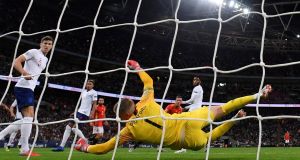 Spain began a new era under Luis Enrique in impressive fashion as they came from a goal down to outplay England in a 2-1 win in their Nations League opener at Wembley Stadium on Saturday night.

Eight weeks after their memorable World Cup run was ended by Croatia in the semi-finals, the optimism sweeping England looked justified as Marcus Rashford opened the scoring after 11 minutes.

But Spain, featuring only five of the players that started their last-16 World Cup penalty shootout defeat by Russia, hit back before half-time through Saul Niguez and Rodrigo.

The second half was overshadowed by a nasty-looking injury sustained by England left back Luke Shaw who needed lengthy treatment after a clash of heads.

Spain threatened to stretch their lead as they dominated possession but England finished strongly with Rashford wasting a great chance to equalise when he fired straight at David de Gea and then having a goal by substitute Danny Welbeck disallowed deep into stoppage time.

England’s defeat was their first in their last 25 competitive fixtures at Wembley. England and Spain will also face World Cup runners-up Croatia in League A Group 4 of the Uefa’s new tournament.