Stephen Kenny’s team had little trouble in strolling past Limerick 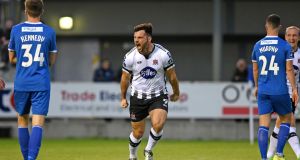 Dundalk had effectively booked their place in the semi-final after 36 minutes by which stage they led 3-0 at the Markets Field in what was another major set back for Limerick.

With his side narrowly grabbing the league points nine minutes from the end a week earlier at the same venue, Dundalk manager Stephen Kenny made four changes to his starting line-up. Back in the side were Ronan Murray, Patrick McEleney, John Mountney and Dane Massey with Dean Jarvis, Chris Shields, Jamie McGrath and Dylan Connolly left out.

Limerick manager Tommy Holland was well pleased with the efforts of his side a week ago and he named an unchanged side.

This time the visitors were totally on top from start to finish and Limerick were fortunate not to have been further behind at half-time.

The opening goal came after only five minutes when Patrick Hoban shot home after good work by Murray and Robbie Benson.

Hoban could have doubled the score three minutes later but he headed just wide and Holland then denied the striker once again after 13 minutes.

But Hoban was rewarded when his header just crossed the line for goal number two after 21 minutes. Holland then denied Murray and Brian Gartland had an effort cleared off the line.

Limerick had not forced a single save and they were rocked again after 36 minutes when Mountney’s shot from a Massey lay-off as good as ended the game as a contest.

A header by Gartland four minutes into the second half indicated that Dundalk had no intention of easing up and Limerick must have been happy when Hoban was replaced by Georgie Kelly after 53 minutes.

Limerick managed to put the ball in the Dundalk net after 53 minutes but there had been a push on goalkeeper Gary Rogers and the effort was disallowed.

There was no respite for Limerick and following a good run by Gartland, Kelly shot low past Holland for goal number four.

Rogers made a superb finger tip save to block a Barry Maguire header but by that stage Dundalk were cruising. The width of a post denied Limerick four minutes from the end of a bruising night for the home side.