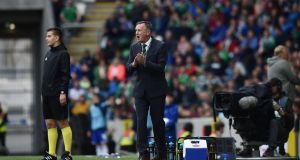 Northern Ireland manager Michael O’Neill: “We’ve played a lot worse and won. To have the level of domination we had in the game, the level of possession, it’s a sore one.” Photo: Charles McQuillan/Getty Images

Northern Ireland manager Michael O’Neill called Saturday’s defeat to Bosnia and Herzegovina “a sore one” after watching his side dominate the match and still lose 2-1.

O’Neill’s side enjoyed 67 per cent possession and had a total of 26 attempts at Bosnia’s goal - compared to five for the visitors - but dug themselves too big a hole by conceding two sloppy goals.

“We’ve played a lot worse and won,” O’Neill said. “To have the level of domination we had in the game, the level of possession, it’s a sore one.

“It’s a good lesson as well because I think it shows the nature of international football, you do get punished.”

Northern Ireland bossed the opening half an hour, but Haris Duljevic poked the visitors in front in the 37th minute, and a positive start to the second half was undone by a mix-up between Craig Cathcart and Bailey Peacock-Farrell which allowed Elvis Saric to score.

“The second goal and the nature of it was a little bit of a hammer blow,” O’Neill said. “But to be fair they reacted well again, even between going 2-0 down and getting to the 96th minute we probably should have got a 2-2 out of the game at the very worst.

“I’m disappointed with the result but in terms of how we played, the positivity of the team, how we pressed, it was exactly what we were was looking for.”

Northern Ireland have struggled for goals of late and that lack of cutting edge was on display again as it took them until stoppage time to get on the scoresheet through Will Grigg, who was in the squad for the first time since November 2016.

Things might have been very different if referee Pavel Kralovec had awarded a penalty in the opening minute when George Saville tumbled under a challenge from Ervin Zukanovic.

O’Neill was certain it should have been a spot-kick.

“The defender leaves his leg there, George steps inside and there is contact,” he said.

“Away from home you maybe wouldn’t expect the referee to give that so early in the game but certainly as the home team and given the nature of the incident I was disappointed he didn’t give it.”

O’Neill had selected Peacock-Farrell ahead of the more experienced Michael McGovern and Trevor Carson, giving the 21-year-old Leeds goalkeeper his first competitive start, and did not feel he was to blame for the second goal.

“It’s bad mistake, a poor goal for us to lose,” he said. “Typically we don’t lose goals of that nature and Craig knows the decision to head it where he headed it was not the right place. Young Bailey was exposed, he had to come and try and do something. We will not dwell on it too much.”

It proved a decisive moment though, leaving Northern Ireland chasing a game in which they were on top - a fact not lost on Bosnia’s star midfielder Miralem Pjanic.

“We were a little bit lucky; they played a very good game,” the Juventus man said. “I think maybe they were also the better team today but we were more concrete, we scored two times.”

Bosnia will now host Austria on Tuesday already in a strong position in the group, while Northern Ireland lick their wounds.

But though the conversation around Northern Ireland this week has been about maintaining and building momentum, the manager refused to get too downbeat.

“It’s not a major setback,” he said. “If this was a Euro 2020 qualification game it would be a different situation because you’ve lost a game at home and home points are vital.

“I said to them, in the past, Northern Ireland teams may have gone under in that situation, but not this group of players. They showed their capability to go right to the whistle and they should be commended for that.”