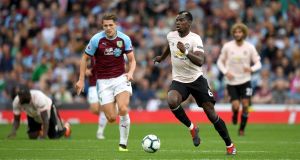 Paul Pogba has fuelled speculation about his Manchester United future by refusing to rule out an exit.

The Old Trafford giants have endured an uncomfortable start to the season as their inability to further strengthen their squad was compounded by shock back-to-back defeats that ratcheted up the pressure on manager Jose Mourinho.

Sunday’s 2-0 win at Burnley was welcome relief for United ahead of the international break, but Pogba has stirred the pot just days into it.

There have been questions over the club-record signing’s happiness at United over recent months and the World Cup winner has done little to dampen such talk.

“There was a lot of talk, but that’s the way things are,” Pogba told Sky Sport Deutschland. “I’m under contract in Manchester.

“My future is currently in Manchester, I still have a contract. I’m playing there at the moment, but who knows what will happen in the next few months?”

These comments are unlikely to go down well at Old Trafford, where the club hierarchy was never moved to sell a player attracting interest from Barcelona.

Pogba returned to United in 2016 after a four-year stint at Juventus, arriving to much fanfare for a club-record €105 million.

The Italian giants have also been linked with the 25-year-old, who was last month reported to be so unhappy that he had informed United executive vice-chairman Woodward of his desire to leave.

Pogba exacerbated speculation by saying he would get fined if he really opened up about his happiness, but later that week Mourinho said he had never been happier with the midfielder as he dismissed talk of tension.

Asked by Sky Sports about that relationship with the United boss, Pogba added: “We have a pure coach-player relationship. That’s how it is.

“One thing I can assure you: I will always give 100 percent, regardless for which coach. I always give everything for United — I cannot say more.”

Pogba has been captain in two of United’s four matches this season, including when he scored from the spot in the season-opening win against Leicester.

The other time the 25-year-old skippered United was the shock 3-2 defeat at Brighton, where he admitted afterwards that his “attitude was not right enough” in a bad overall display.

Pogba’s agent Mino Raiola took aim at United great Paul Scholes for questioning his client’s leadership in that match in a Twitter rant that also referenced the midfielder’s potential exit.

But the midfielder did not leave before the European deadline and indicated commitment to the United cause after the chastening 3-0 home loss to Tottenham.

“It won’t be easy, but it’s just the start of the season,” he said. “I prefer to start badly and end well than start well and finish badly.

“It’s bizarre. (Against Tottenham) we were determined, we started well, and in the end we lost 3-0. It’s a shock.”

Pogba is currently with France for their Uefa Nations League matches against Germany and Holland.