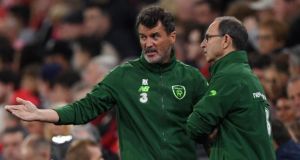 At least Uefa will have been happy with the way the game in Cardiff went on Thursday night. The organisation behind the much derided Nations League has been anxious to big up their new baby up and the manner in which Wales beat Ireland must have been just the sort of thing they were hoping for to silence the sceptics. After all, how many sides would have been bothered to dish a pasting like that out in a friendly game, glorified or not?

Martin O’Neill’s enthusiasm for the new competition will clearly not have been helped by the start Ireland side have made. To judge by his comments afterwards, the 66-year-old clearly still sees himself as the right man for this job but the quality of his team’s performance on Thursday and the tone of the reaction to it will presumably have alerted him to the fact that there are a growing number of observers who require some convincing.

Three more competitive games against the very sides that have done so much to undermine his standing in recent times scarcely seems like the most promising scenario for the northerner. The worst case in this three team group really does look pretty bleak at the moment and O’Neill clearly needs to avoid it if the case for the FAI making a change is not to start looking more compelling. As things stand, he can point to his record of conjuring rabbits out at big moments before but the last of those – in Wales last October – suddenly seemed a very long time ago as Gareth Bale was running riot this time.

Obviously, there is an issue with the players. O’Neill’s options are so poor that even his fiercest critics aren’t really claiming that he picked the wrong team in Cardiff. Matt Doherty is about the only player with real cause for complaint but nobody feels he should replace Seamus Coleman so starting him means playing him out of position which, at the very least, makes the whole issue a good deal less clear cut.

This week’s injury list meant opportunities for others to press claims but Conor Hourihane has yet to demonstrate that he can make an impact at this level while Callum O’Dowda and Callum Robinson struggled to pose the Welsh any significant problems. Beyond that there is recurring lack of cohesiveness that gives rise to suggestions the players don’t fully understand what is required of them – a claim O’Neill angrily rejects.

Jeff Hendrick, you would think, must know by now but this turned out to be yet another night when the now 26-year-old failed to deliver on all the potential we all keep saying is in there somewhere.

Behind him were Ireland’s first choice back five. All four defenders are regulars for their clubs in the Premier League and with have than 150 international caps between them. This is as good as it gets from an Irish perspective just now but on Thursday it wasn’t nearly good enough.

Coleman may have emerged with some credit but every one of the others had a pretty dismal night with Stephen Ward and Ciaran Clark, in particular, given torrid times by the Welsh and Darren Randolph beaten twice at his near post. O’Neill, understandably, declined to criticise individuals but talked afterwards about watching the game back and ironing out “a few of the problems that were fundamental”.

“Next month there might be one or two fitter lads,” he suggested, “I’m hoping one or two will be back but if not we will soldier on.”

We can only presume that the celebrated motivator’s team talks inspire a little more confidence. They ought to given the money he is on – some €2 million a year with Roy Keane picking up around €750,000 for his role as assistant.

Keane’s precise role in alienating Harry Arter could do with being clarified but however small O’Neill says it was, it seems like a pretty poor return for his employers on that that day’s pay.

Arter divides opinion and had certainly not delivered for Ireland in the way that might have been hoped but O’Neill is not in much of a position to be losing players of his type or calibre.

On Thursday, Wales had not only the game’s sole superstar but most of the game’s other best players too. Like Ireland, they had six surviving starters from the game last October but O’Neill would surely have liked to have been bringing in the likes of Ethan Ampadu or David Brooks, 17 and 21 respectively. By the end of the night, Ryan Giggs had used six players who were under 23, the age of the youngest two players in Ireland squad.

There is little prospect of the situation improving significantly in the near future. Only one of Noel King’s current under-21 squad – goalkeeper Kieran O’Hara – is at a Premier League club (Manchester United) and he is nowhere near the first team. In fact, at the moment he is on loan at Macclesfield. Players like Jon Walters, who returned to Ipswich yesterday and will not be travelling to Poland, get to play on into their mid thirties, and we should be grateful they do, because nobody is good enough to displace them.

The game has changed dramatically over the past 30 years and the FAI was asleep at the youth development wheel for most of that time. People could see it coming but it far too long for the association to act. Now that it has, it is playing catch up but lacks the money to provide the required support to the clubs it has charged with implementing the system it has devised.

And yet O’Neill’s job, when it boils down to it, is to make more, much more, of what he has. On his best days, he has exceeded expectations but for all his obvious confidence in his own ability, the last two competitive games have been terrible. The task is not getting any easier, but with Denmark and Wales coming to Dublin next month, he could seriously do with delivering again.