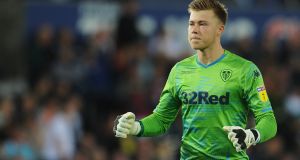 Leeds United goalkeeper Bailey Peacock-Farrell had low-level enquiries from England. 'It was more a few feelers and gauging where I’m at here.' Photograph: Getty Images

At 2pm this afternoon in Belfast, Bailey Peacock-Farrell, Leeds United’s 6ft 4in fresh-faced goalkeeper, is expected to earn his second cap for Northern Ireland.

The first, against Panama in pre-World Cup summertime, was in a friendly. Today, against Bosnia-Herzegovina in the Uefa Nations League, it will be in a competitive match. From here, internationally, there is no going back.

But, unlike Rice, there will be no international pause for Peacock-Farrell. He is emphatic: “I’m Northern Ireland, I’m at Northern Ireland. Hopefully I can get to make that competitive debut.”

It was said in a corridor at the Northern Ireland team hotel on Belfast Lough. Kyle Lafferty walks past making snoring noises. This was one interview in a chain of them and for a young man who has only established himself at Leeds these past six months, Peacock-Farrell speaks calmly, maturely.

The lights, the cameras, Dictaphones and questions, however friendly, bring pressure. It would be understandable if Peacock-Farrell, like Rice, had thought a pause might be required, a step away to consider the broad state of his affairs. A professional’s approach to his career is different to that of fans.

It turns out, Peacock-Farrell has done so already. The enquiries from England were exploratory, he says, and low level. He did not have Gareth Southgate on the line. “It was more a few feelers and gauging where I’m at here,” Peacock-Farrell explains. The option was there. But, speaking to my family and speaking to my agent, they’ve all said that what I’m doing here is the better option for me. There’s longevity in terms of an international career. I had a chat with a few people in England before I left, but it’s completely forgotten about. My sole focus is on this Saturday.”

Born in England north of Leeds, but with an Irish grandfather from Enniskillen – Jim Farrell – Peacock-Farrell also qualifies for the Republic of Ireland. Indeed, Noel King from the FAI has been on asking similar questions to his English counterparts. King received similar answers.

“Last year, it was,” Peacock-Farrell says.

“Noel King. Again, it was a chat to see where I was, how I was feeling.

“I just said: ‘Look, I’m with Northern Ireland. I’ve played the [under-21] game and I don’t feel like I want to switch.’

“Obviously I know you can. But I’ve massive loyalty toward Northern Ireland because of the chance they have given me. And the time of day they gave me.”

It was a phrase Peacock-Farrell was to repeat - “the time of day”. It is unusual in its everyday normality. It’s not a stock football phrase.

What Peacock-Farrell appreciates is that Michael O’Neill and his goalkeeping coach Maik Taylor have shown an interest in him well before anyone else and that they have sustained it. It is more than two years since O’Neill invited Peacock-Farrell into a Northern Ireland training camp, just to get a feel of things, and Peacock-Farrell recalled Taylor turning up in Lowry gloom at Salford last October to watch him.

He was on loan at York City at the time, a measure of where he was and his rise since. International football and working under the direction of Marcelo Bielsa were beyond the horizon.

“He was there in the pouring rain under a stand that had no roof,” Peacock-Farrell says of Taylor. “He stood and watched and to know you’ve that support means a great deal.”

How did you play?

“We lost, not one of my best games. It was completely different football to what I was used to. An eye-opener. It brought me on a lot. Having to deal with the physicality of it. That short one month provided a lot for me when I went into the first team with Leeds. I could deal with the physicality in the Championship because I’d dealt with it at York. It’s almost rugby.”

Taylor waited in the rain to see him: “Maik spoke to me after. It’s great they show you the time of day.

“They care about how you are as a person and how you’re progressing. Even when Michael’s not present, he’s always got eyes on you. Andy Cousins [O’Neill’s chief scout] has been to several games. Always someone keeping tabs.”

It has contributed to Peacock-Farrell’s decision-making – on and off the pitch. So, too, has three months in company of Bielsa.

The renowned Argentine coach is a source of fascination. Bielsa’s arrival at Elland Road has seen Leeds move undefeated to the top of the Championship. Peacock-Farrell, who became the No. 1 only in March, has been retained. He is chuffed. It was not guaranteed.

It is the overall Bielsa impact, though, which drives interest. Pre-season days, Peacock-Farrell confirms, lasted from 9am to 7pm, there has been litter-picking at the Thorp Arch training ground and dressingroom cleaning at away games.

“We had a few glances at first,” Peacock-Farrell says of the Bielsa instruction to collect litter. “It’s all new and I don’t think this has ever happened. But we’ve taken it in our stride.

“When you sit down and you view his methods and his reasoning, he’s creating better people and better footballers. The soul of your footballing ability, your core values, what he wants is for you to give everything for yourself, for the team, for the manager and the fans. He wants to create the mentality that you leave everything out there, that you’re ready to fight for each other. “The way we play with the high press and the energy, sometimes you might have to pick up, do things that aren’t your job. You’ve to do it for the greater good.”

The greater good is another phrase not heard every day in football. But so far - and it is early - Bielsa’s holistic attitude is affecting his new players.

“The litter picking – and several chats about respect – and the rules instilled now at Thorp Arch, loads of things, he’s kind of changed the whole mentality of the place. I think it’s showing on the pitch.”

It’s Millwall away next for Leeds, where the good start to last season folded. Win, lose or draw, Peacock-Farrell says: “Yeah, we’ll be cleaning the Millwall dressing room. The manager helps as well. That’s the core values: respect for the greater good and for people perceived to be below you but who aren’t – cleaners, groundstaff.”

Another significant change at Thorp Arch is the separation of the first team from the Academy. Bielsa wants this, has asked for new exits and entrances to be constructed.

Peacock-Farrell is about to make one of those step-changes of his own today at Windsor Park. He has made others – he was a left winger with Middlesbrough before diving into goalkeeping. He could pause, but he won’t.