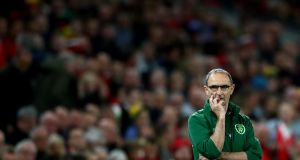 We’d all hardly come down from the high of the World Cup and here we were whipped into a frenzy all over again by the arrival of the Nations League, the draw only heightening our sense of anticipation after we’d been put in a group with Wales and Denmark, it being a least a few months since we’d played both.

The only dampener during the build-up was the incessant whining of those who suggested that the format of the new competition was difficult to understand, particularly with how it relates to qualification for the 2020 European Championships, when it really couldn’t be more straightforward. To put it in the simplest of terms, from the Republic of Ireland’s point of view all’s that’s required for our boys to book a place in the Euros is: x + 3y - 7z = (x + 2y + 15)(y - 39z) + x - 4y ÷ (8z - 2x).

With that sorted, then, it was time to get ready for the Big One in Cardiff, our hosts for the evening Sky Sports, terrestrial telly viewers denied the chance to see the game because, for some reason, the Nations League has yet to be added to the list of sporting crown jewels. (By full-time whichever presidential candidate vows to block it from ever being added to the crown jewels’ list will be a shoo-in for the Aras).

Scott Minto said a big hello, and introduced us to his panel, Phil Babb and James Collins, attempting to explain the Nations League format to both men, pointing out that Uefa was keen on replacing friendlies with competitive games that actually mean something.

James nodded. He got it. So, what did James reckon about the night’s contest?

When we returned we got to see Keith Andrews having a chat with Seamus Coleman, the topic of the (alleged) Roy Keane (alleged) altercation with (the alleged) Harry Arter popping up.

“But, sure, these things happen, yourself and meself had one,” said Seamus, Keith’s hair volumising with discomfort.

The game? Well, after 1-0 the Welsh people were singing “you’re just a shit Northern Ireland”, which was rude, but they had a point. Mind you, the response of “you’re just a small town in England” was top class. But that proved to be the high point of Ireland’s evening.

Soon after 2-0, a Ben Davies worldie of a pass and Ciaran Clark deciding it was a safe enough option to turn its recipient, Gareth Bale, on to his left foot.

By the time it was 3-0 Keith concluded that it was “turning into a horror show”, which was a generous appraisal of the events.

Come half-time Scott didn’t even try to be gentle with Phil’s feelings, “the scoreline probably flatters Ireland”, he said.

“I dare say Roy Keane will have a few things to say in the dressing room,” he said, although it was more likely that Roy was on his mobile to Harry offering his profuse apologies for their alleged altercation while Martin held an AK47 to his head.

Second half? The chief goal, said Phil, was to avoid a “cricket score”.

How would he do that? By making changes to the formation. And the defence. The midfield. And the attack.

Scott hadn’t the heart to point out that Uefa rules wouldn’t allow you to field a whole new team in the second half, so he left it be, which Wales didn’t, adding a fourth goal a little bit after the break.

Our commentator Bill Leslie told us that their right back had just scored his first ever senior goal, with his left foot too, so if we thought it couldn’t get any worse it did. A cricket score was looming.

But Wales, bless them, declared on 4-0, Shaun Williams narrowing the deficit to just the three with a chip over silly mid off.

“It was so one-sided it beggars belief,” said Phil come full time.